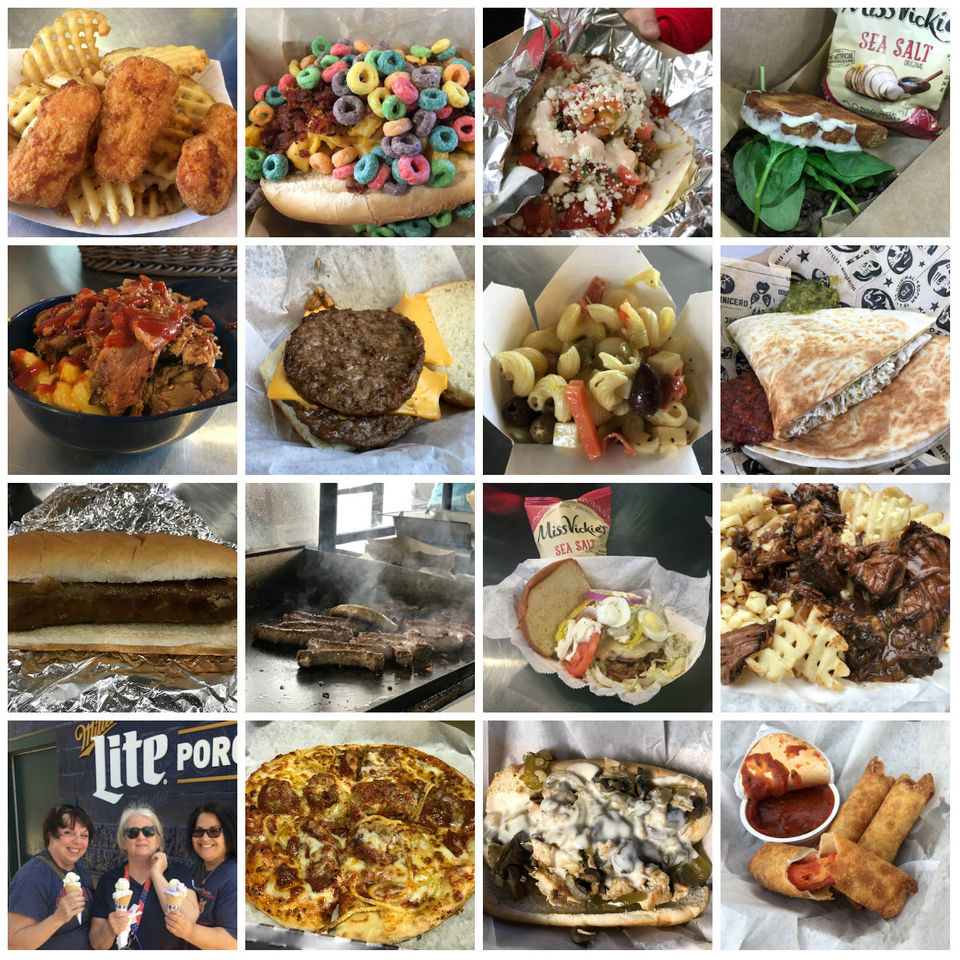 CLEVELAND, Ohio — Whether you prefer traditional ballpark fare or are looking for something a bit more adventurous, Progressive Field has plenty of concessionaires serving up a wide array of choices.

But which foods are worth your hard-earned money?

Now, they’re back with rankings of the 25 best Progressive Field foods based on their personal selections off the menu boards. They were free to choose anything — whatever tempted their eyes and taste buds.

See the Top 25 rankings below, starting with No. 25. Hometown Sausage’s stuffed sausage was their No. 1 favorite food. 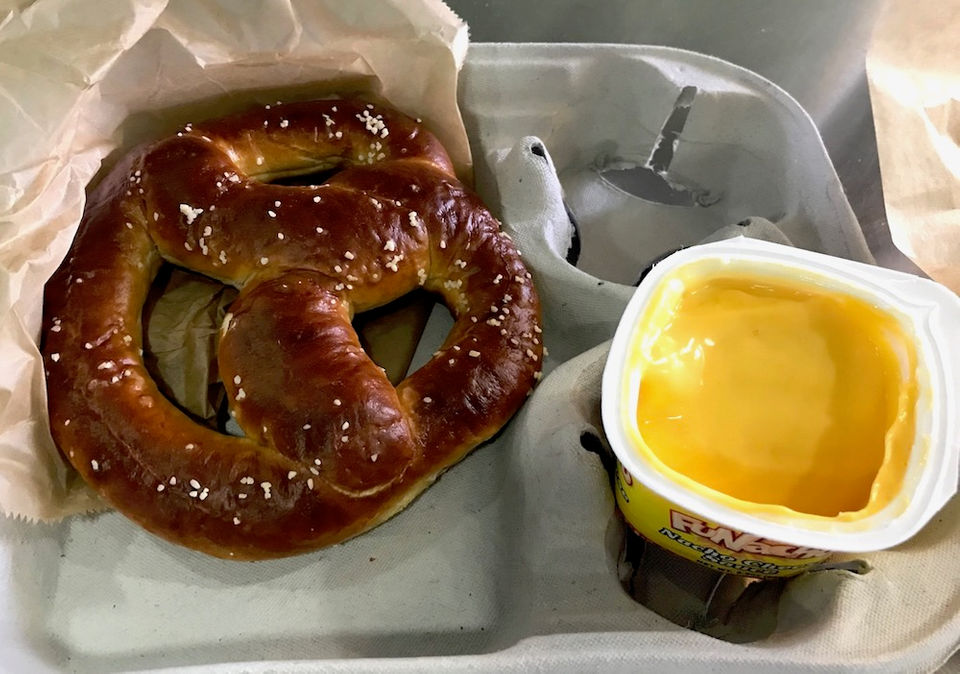 Which stand: These pretzels are sold all around the ballpark. We tried ours at Great Lakes Brewing.

Rodriguez is a huge fan of hot pretzels and this one, unfortunately, was disappointing. The pretzel did not taste fresh. It had a buttery taste, but was very dry. On the plus side, the amount of salt was just right. Not too much. The cheese cup was served warm enough to help soften the pretzel.

These pretzels are available throughout the ballpark so perhaps at a different stand or a different time the outcome would have been better. 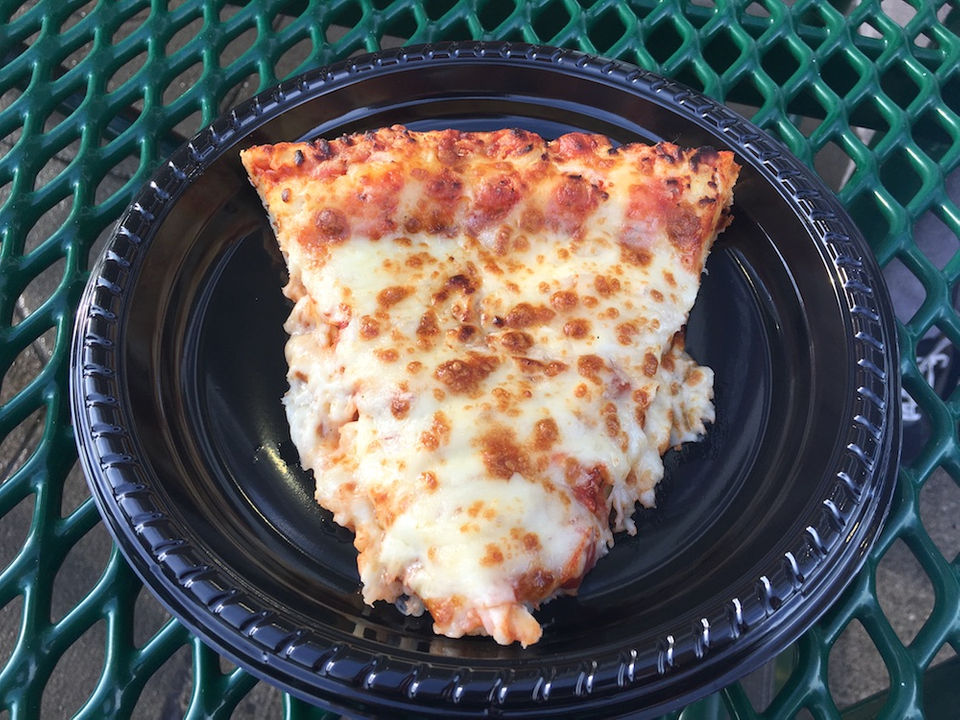 Rodriguez says: This pizza had lots of cheese but lacked any flavor. It did have a thicker crust if that is your preference.

Cain says: Not that impressed. The crust was thick, but a bit on the doughy side. Plenty of cheese topping, but no taste.

Cain says: Not crispy. Wish it was because it had good taste.

Rodriguez says: Very tasty but a little chewy. Perhaps because it isn’t made to order.

Bacon the newest mascot was introduced in May 2018 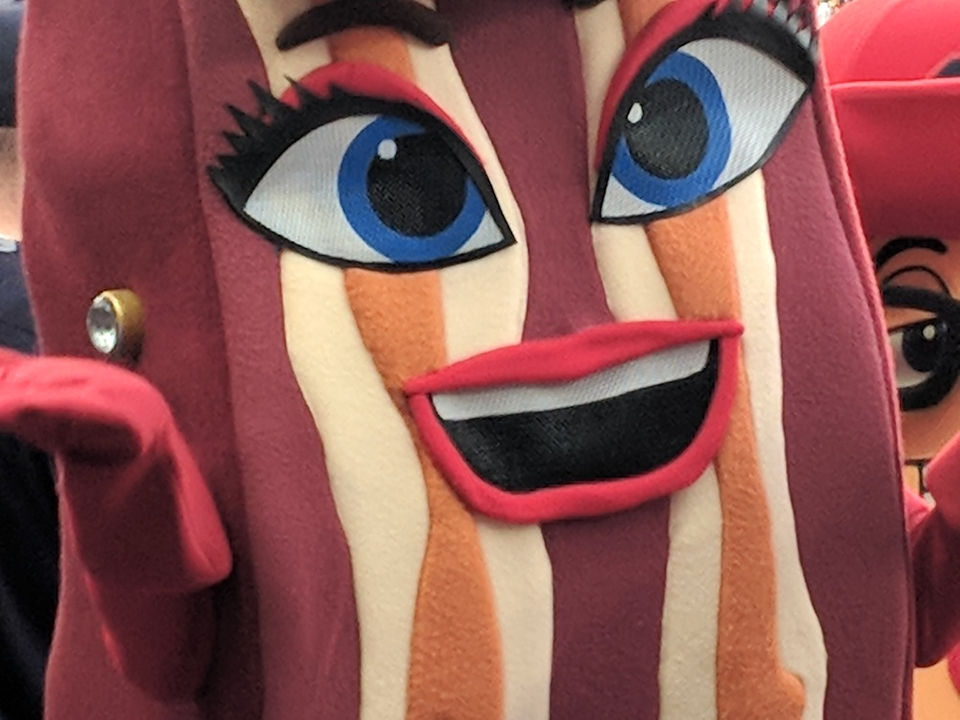 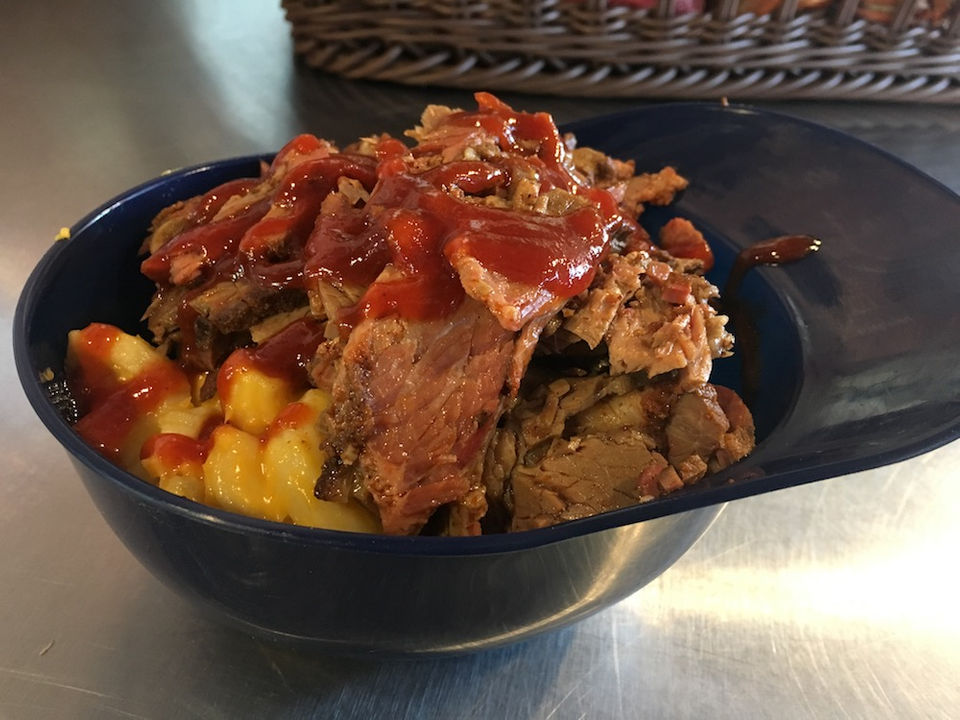 Cain says: Hearty dish but mac doesn’t have great taste and my bite of meat was all fat.

Rodriguez says: The noodles were dry and not cheesy. The BBQ was difficult to eat because it was sliced and not shredded but the Montgomery Inn sauce was good. 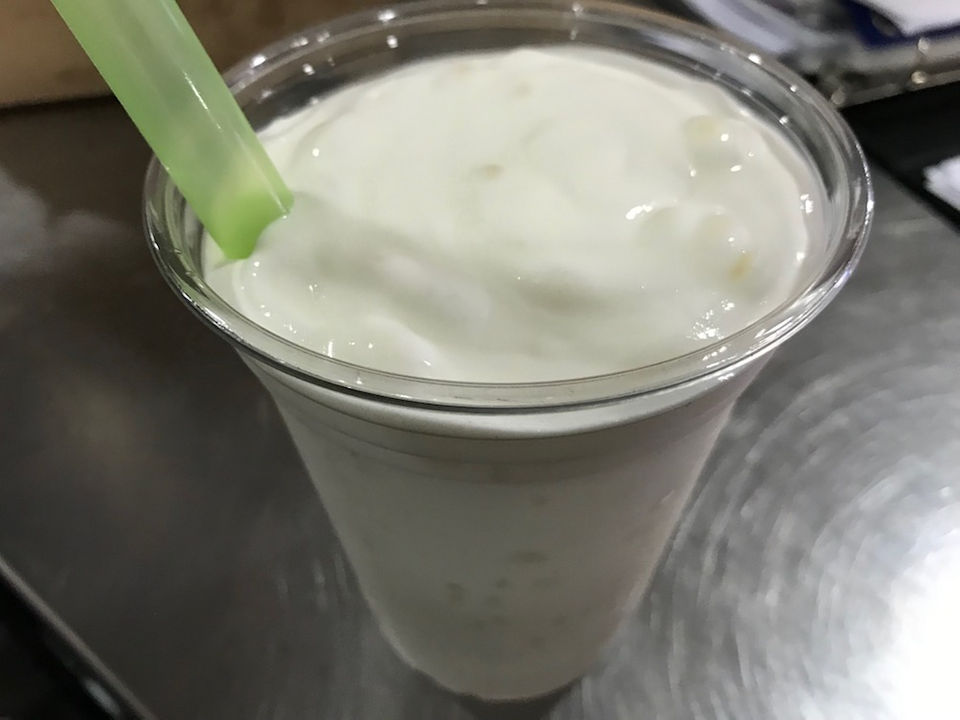 Cain says: Thick and creamy, mild taste, not too sweet.

Rodriguez says: Very thick and sweet vanilla shake. You really need the bigger straw it comes with. Reminded me of a vanilla Frosty from Wendy’s.

Rodriguez says: Doritos with cheese and jalapenos. I prefer regular nachos, although the bag keeps these from falling all over the place.

Cain says: The bag is convenient, but I prefer my nachos made with corn chips instead of Doritos. 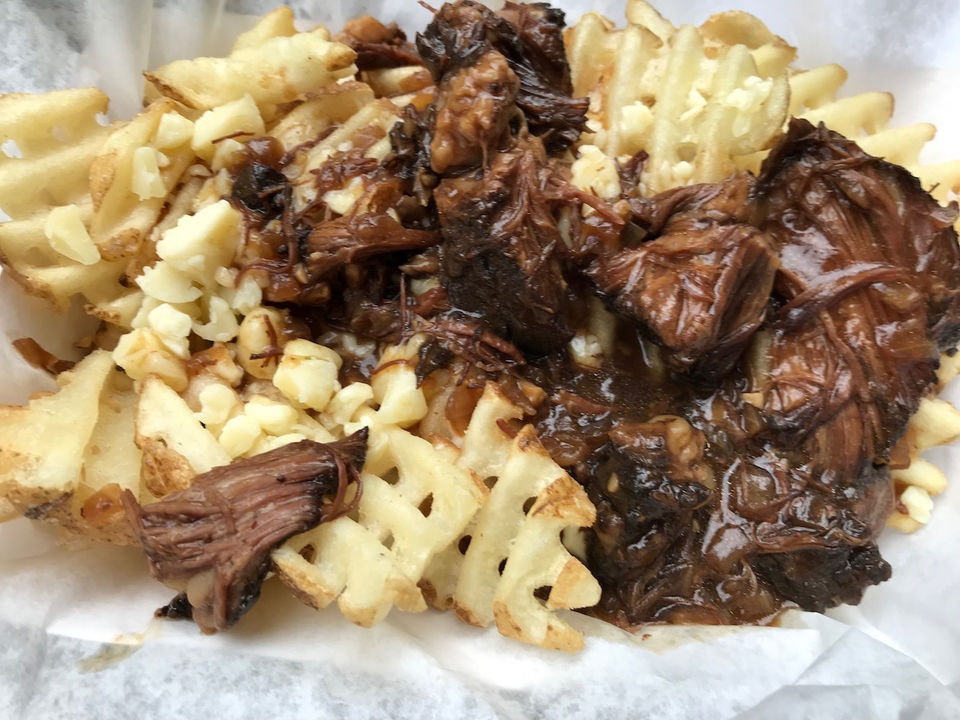 Which stand: The Fat Rooster

Cain says: Meat was tender and tasty but a bit fatty. The fries were nice and crisp.

Rodriguez says: Way too much gravy. Lots of fat on the meat, but flavorful. Small bits of onions and needs more cheese. 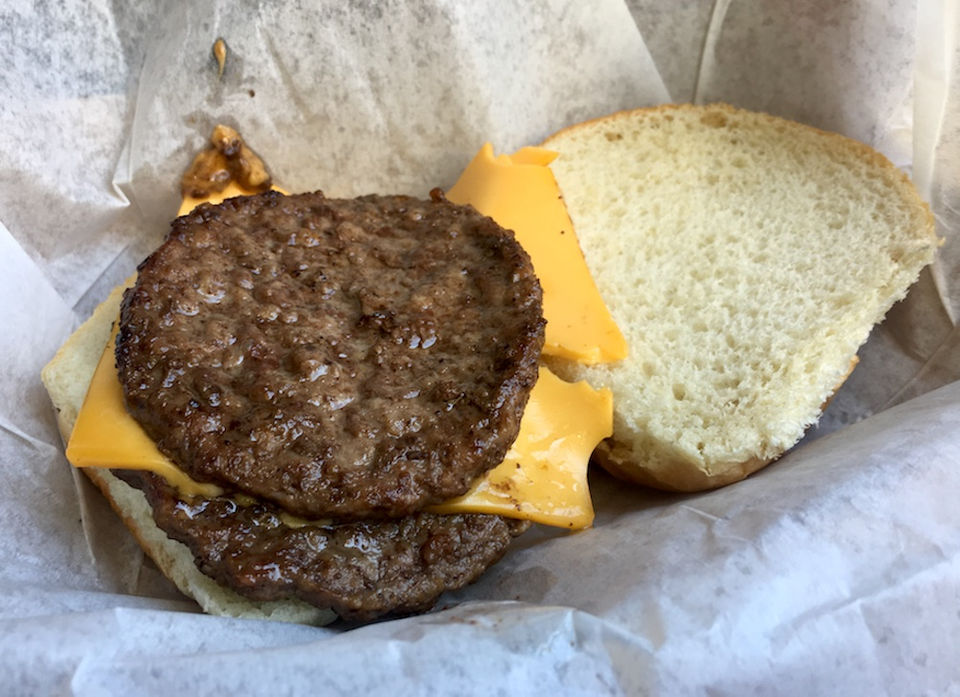 Rodriguez says: I wish the cheese was melted more but this is a good option and value.

Cain says: I appreciate that they make your burger when you order, it is just not laying around. It was a tasty burger, with plenty of cheese. A solid burger. 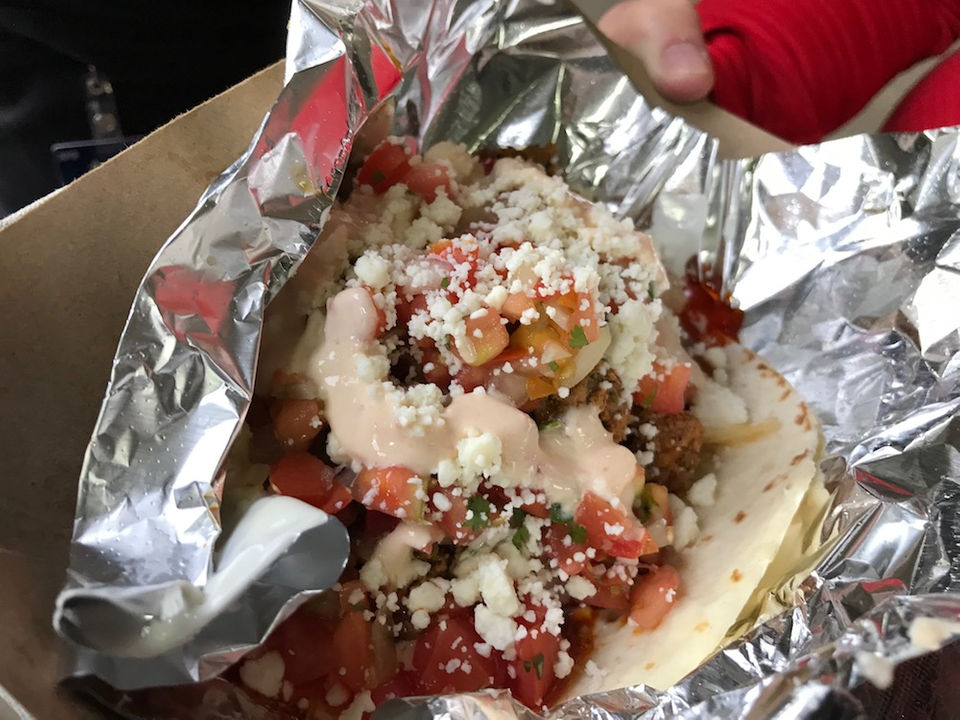 Cain says: Messy and spicy! Veggies temper the spiciness, but just a bit.

Rodriguez says: There is spice to the chorizo, but not overpowering. There are lots of toppings and a good amount of meat on this taco. Grab napkins. 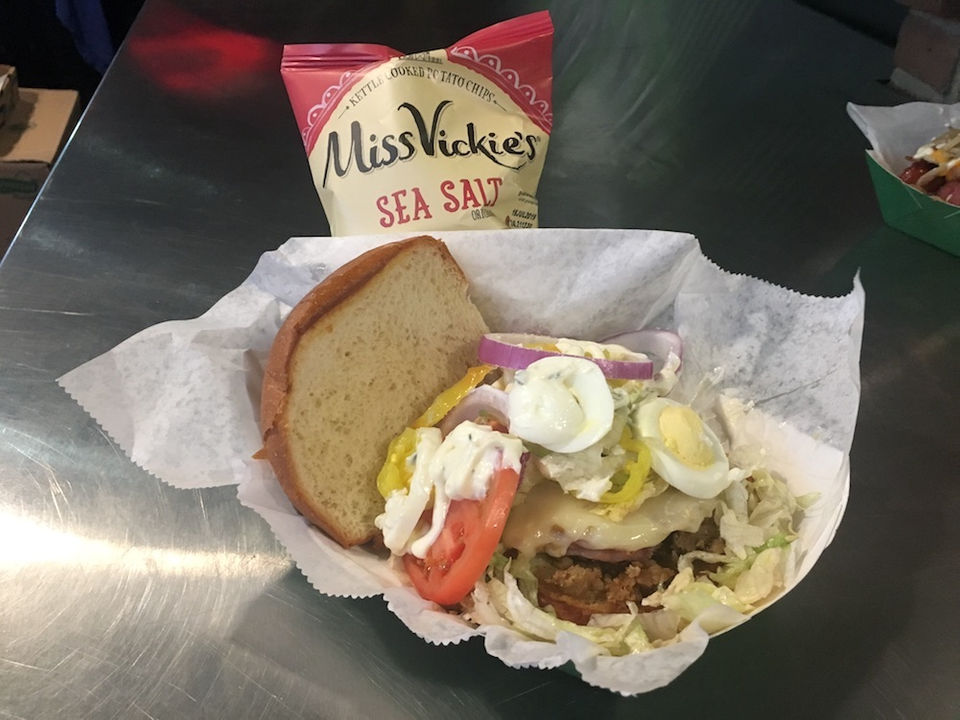 Cain says: I love all of the ingredients, but it was spicy and fell apart as I tried to eat it.

Rodriguez says: Too many ingredients make it hard to eat. It is a hearty sandwich though. 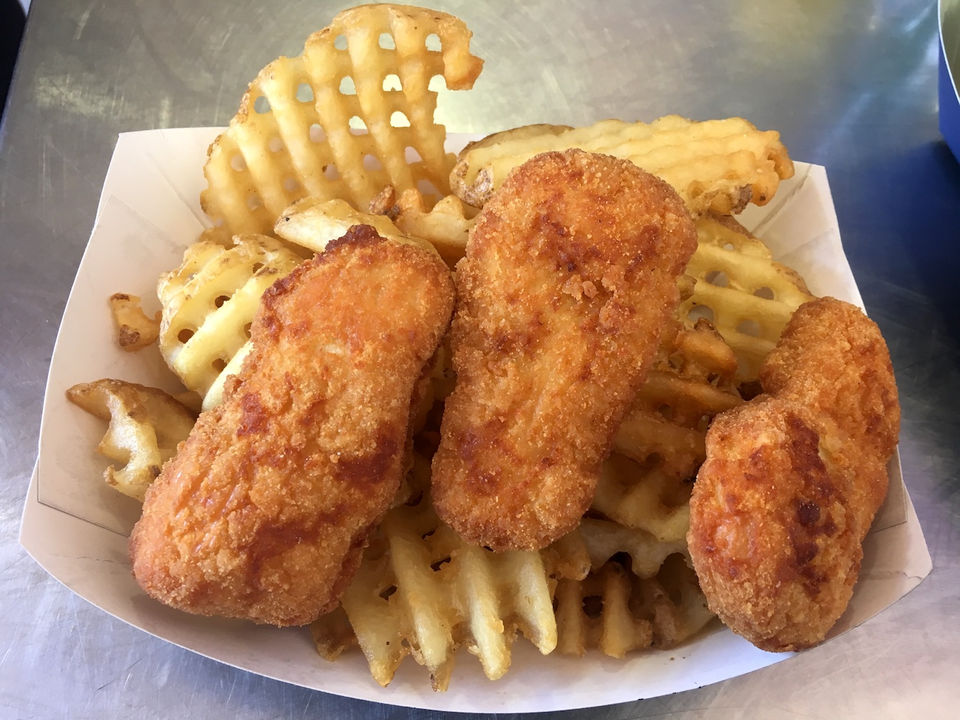 Which stand: Build a Burger

Cain says: Crispy and crunchy chicken, good-sized pieces. The fries were crispy but soft inside.

Rodriguez says: Not your typical chicken tenders. These chicken pieces were huge and cooked well. Nice and crispy on the outside. The fries also were cooked perfectly. 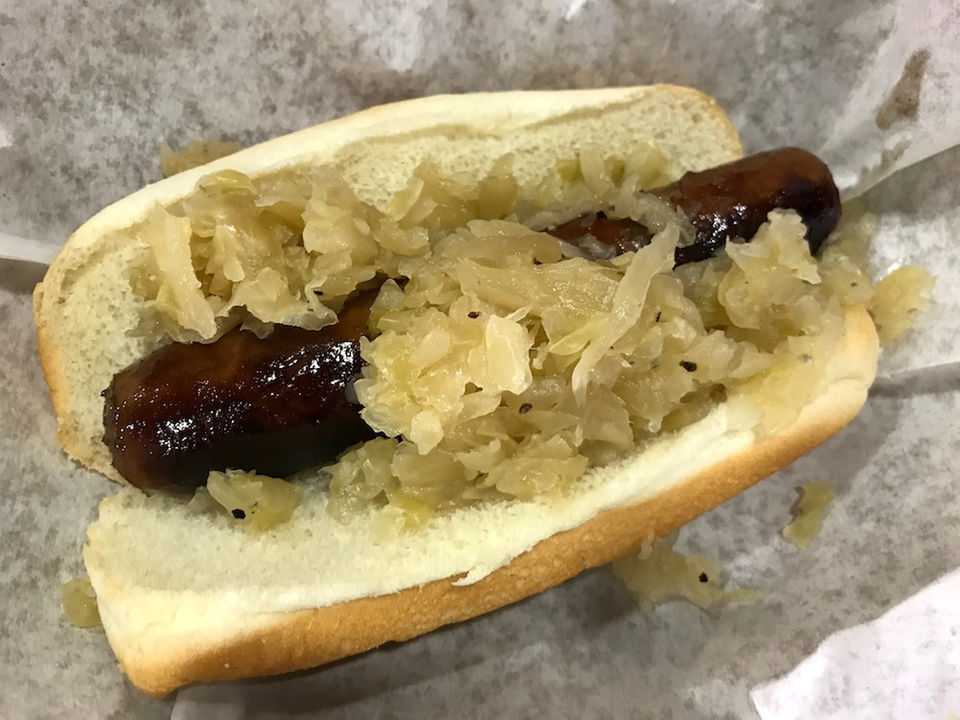 Rodriguez says: No shortage of kraut on this dog.

Cain says: I liked it, but you have to be a fan of kraut to enjoy it. 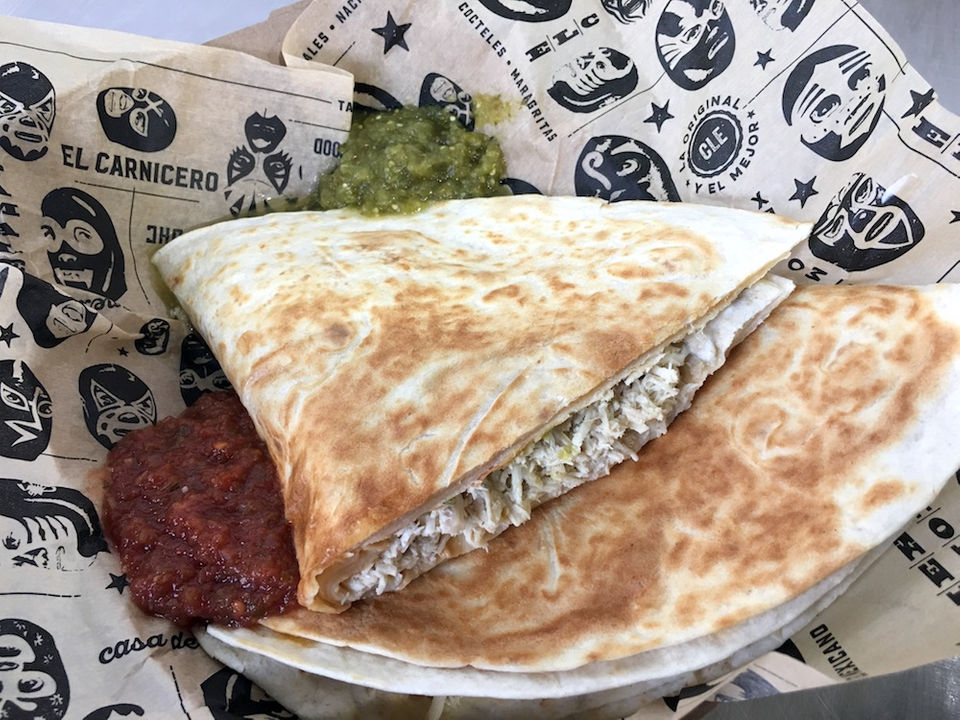 Cain says: Salty! The shell does have good texture though.

Rodriguez says: Big! Lots of chicken, although it was very watery. You need to grab lots of napkins to absorb the liquid on the bottom of the container. 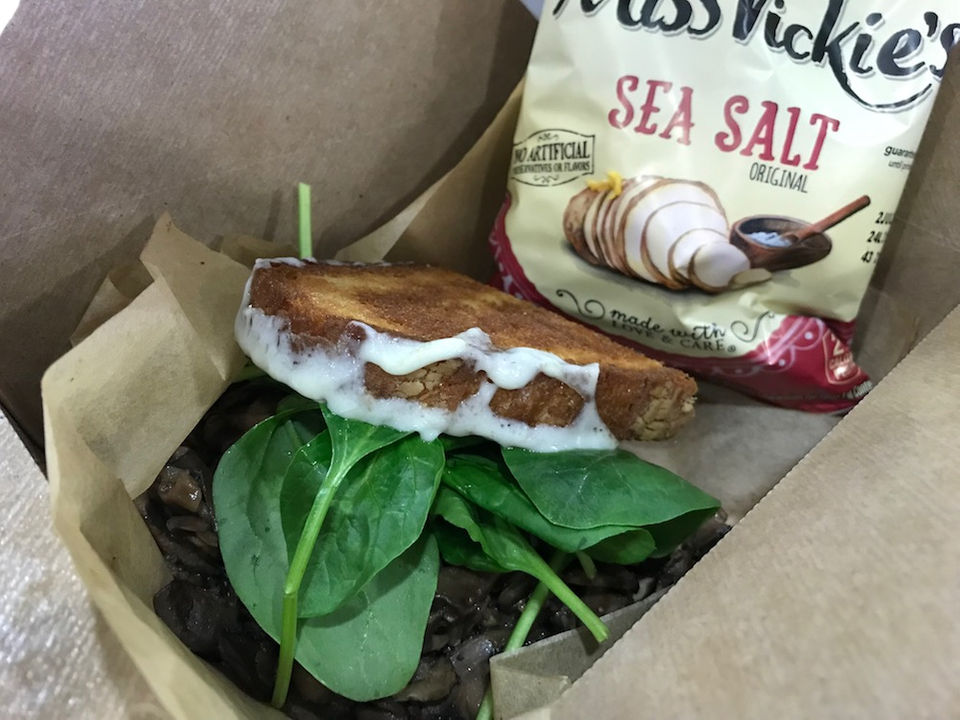 Which stand: Melt Bar and Grill

Cain says: Rich meaty taste without the meat. I loved the addition of the fresh spinach. 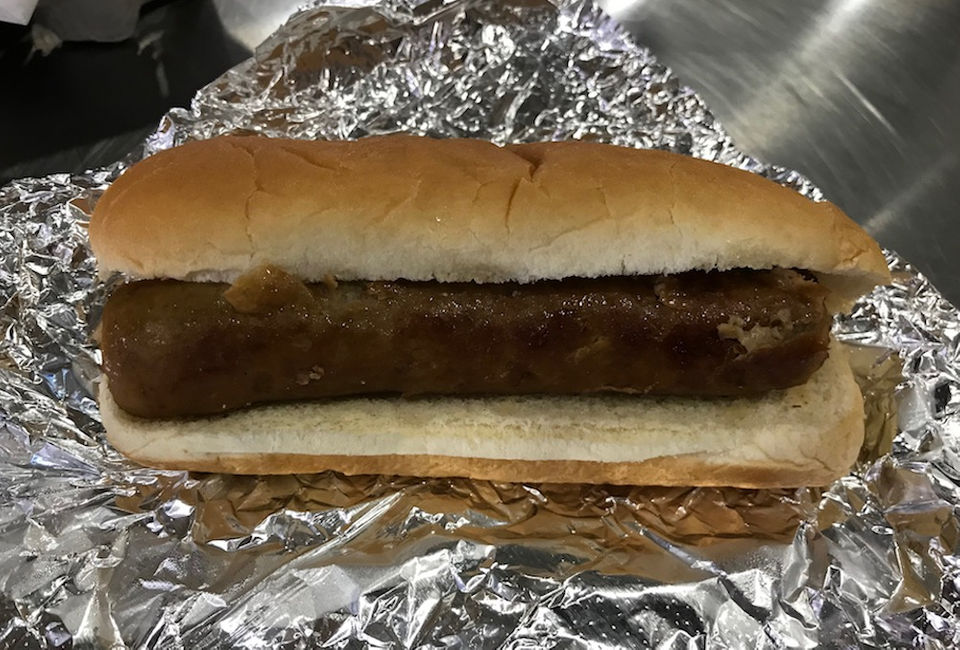 No. 10 Pizza Logs, Burgers and Fries 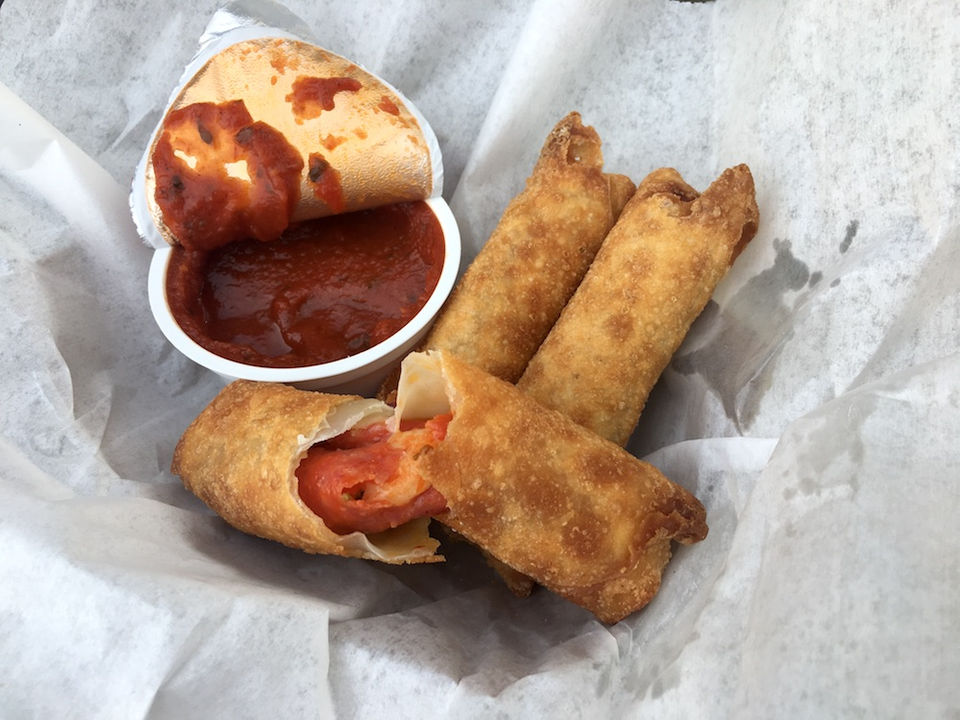 Which stand: Burgers and Fries

Cain says: Crunchy shell, lots of cheese and pepperoni. The marinara didn’t add to the flavor.

Rodriguez says: These are like pizza egg rolls! Crunchy on the outside and cheesy on the inside. 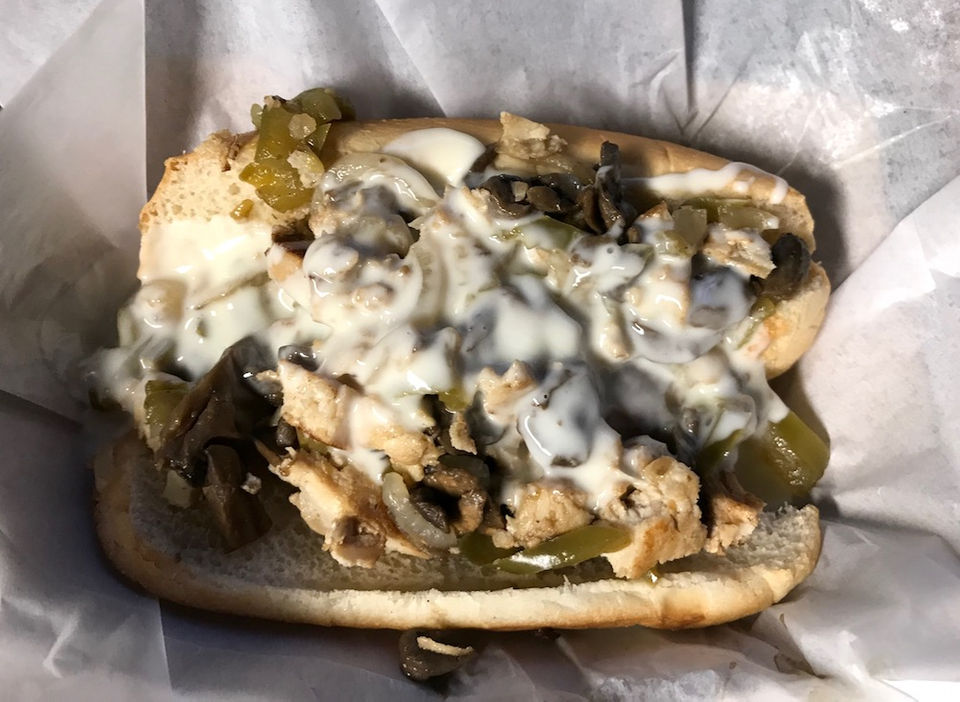 Rodriguez says: Chicken was flavorful. Wish there were more onions, mushrooms and peppers.

Cain says: A pretty good alternative to the traditional cheesesteak. The chicken was tasty and there were plenty of toppings.

No. 8 Italian Sausage, Sausages and Dogs 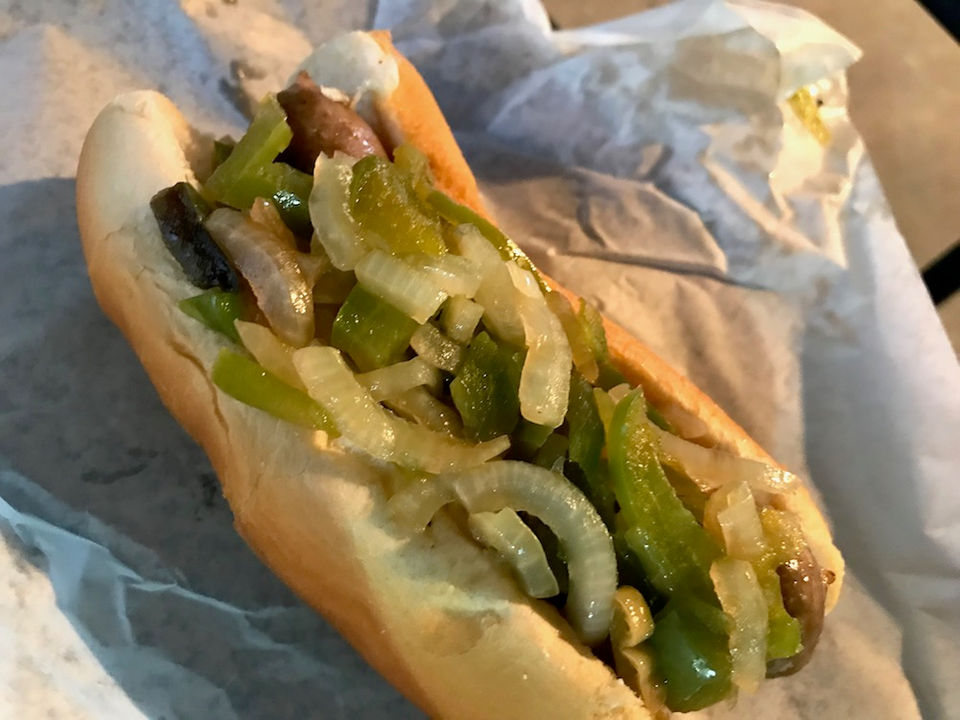 Which stand: Sausages and Dogs

Rodriguez says: A well-cooked sausage, and no shortage of onions and peppers. A good alternative to the standard hot dog.

Cain says: I really liked this sausage. It was nicely spiced, not too overwhelming, and was grilled to that perfect crispy skin. 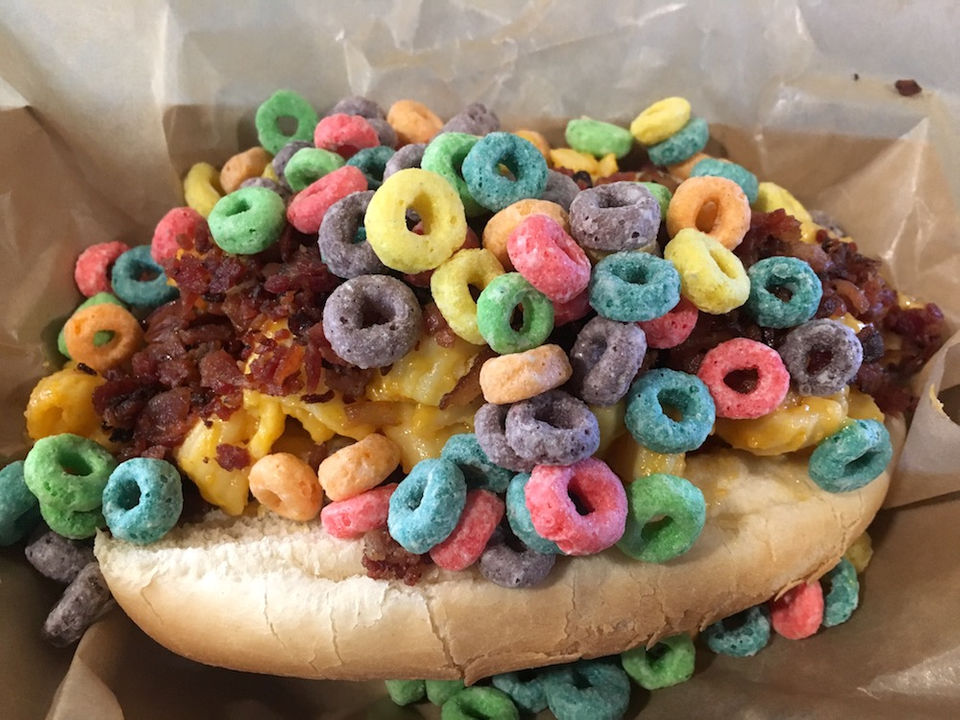 Cain says: Weird combination but the dog was very good.

Rodriguez says: Don’t let the look of the toppings scare you. This is a very colorful dog and it was surprisingly really good. This one is like breakfast and lunch/dinner rolled into one. 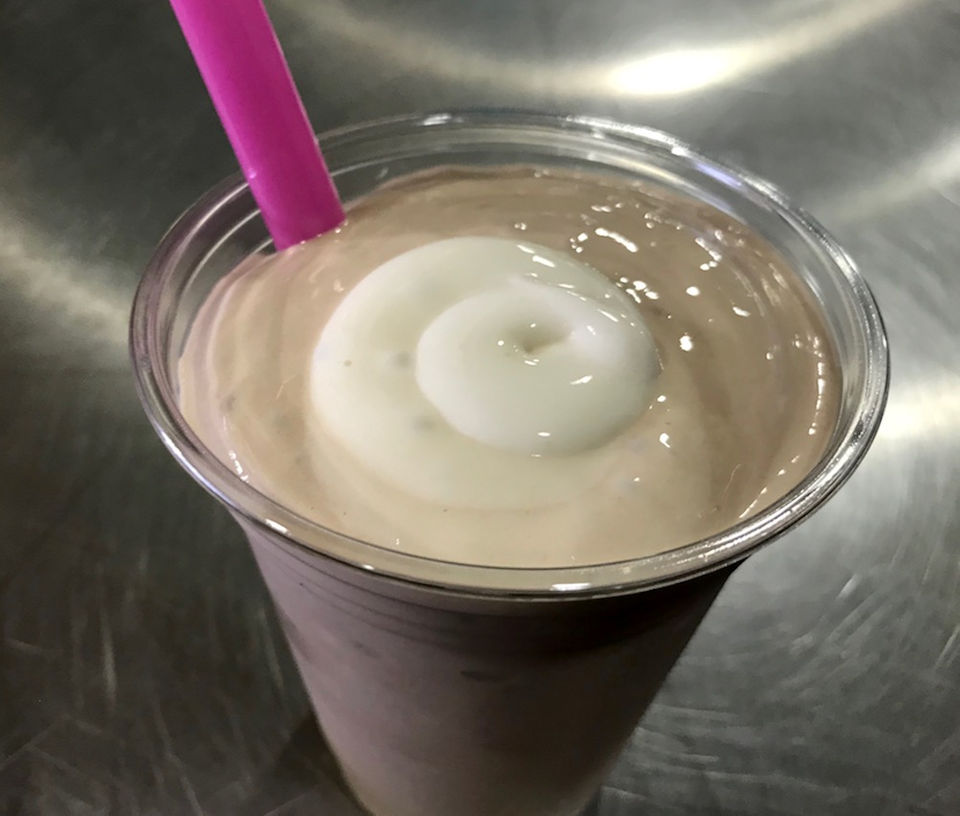 Which stand: Cleveland Dogs and Shakes 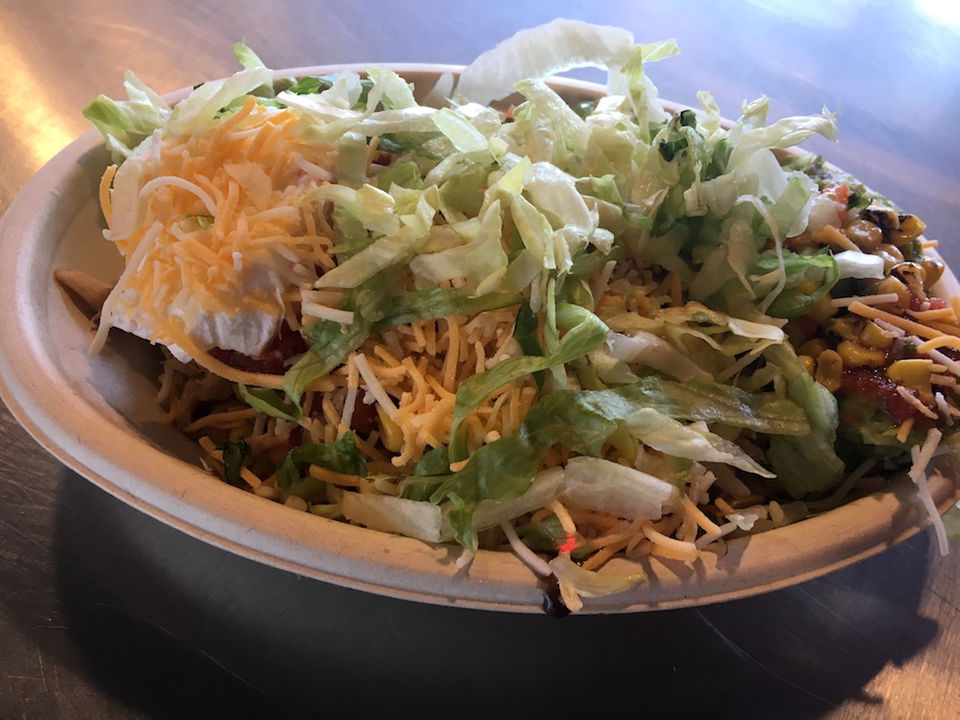 Rodriguez says: The meat was cooked well and had a good flavor. Generous serving. 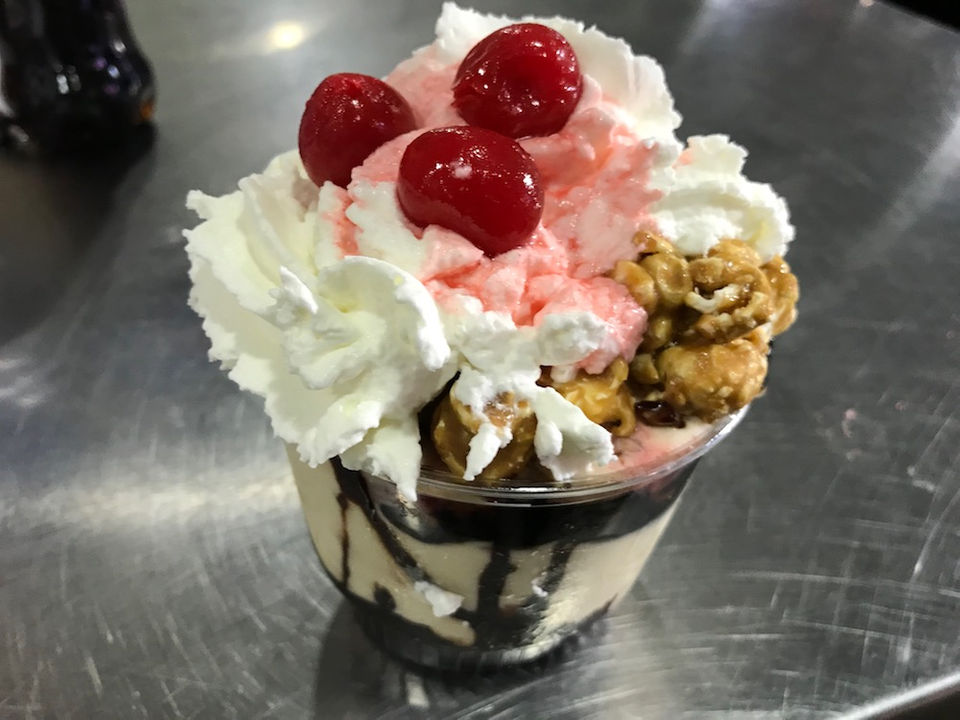 Cain says: This is one of my all-time favorites. I love the sweet creaminess of the ice cream and the hot fudge coupled with the salty, crunchy peanuts and the caramel corn. YUM!

Rodriguez says: This is a must-try sundae. So many delicious ingredients that work perfectly together. 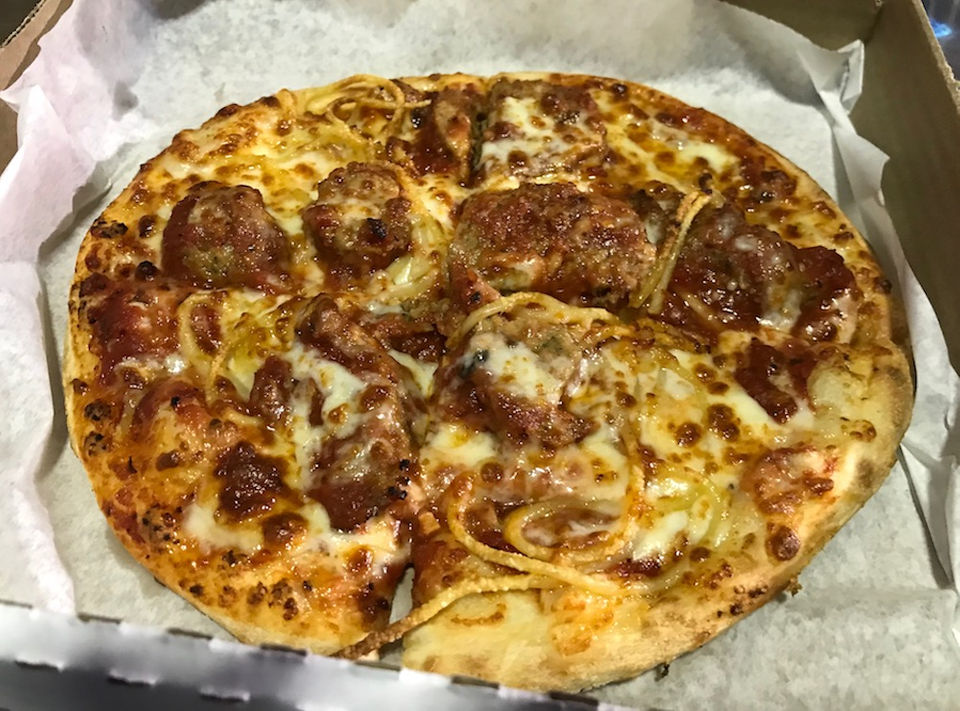 No. 3 Spaghetti and Meatball Pizza

Cain says: I was surprised I liked it, but the first bite won me over!

Rodriguez says: A must try. Carb overload but worth it. Who would have thought spaghetti would work on a pizza? 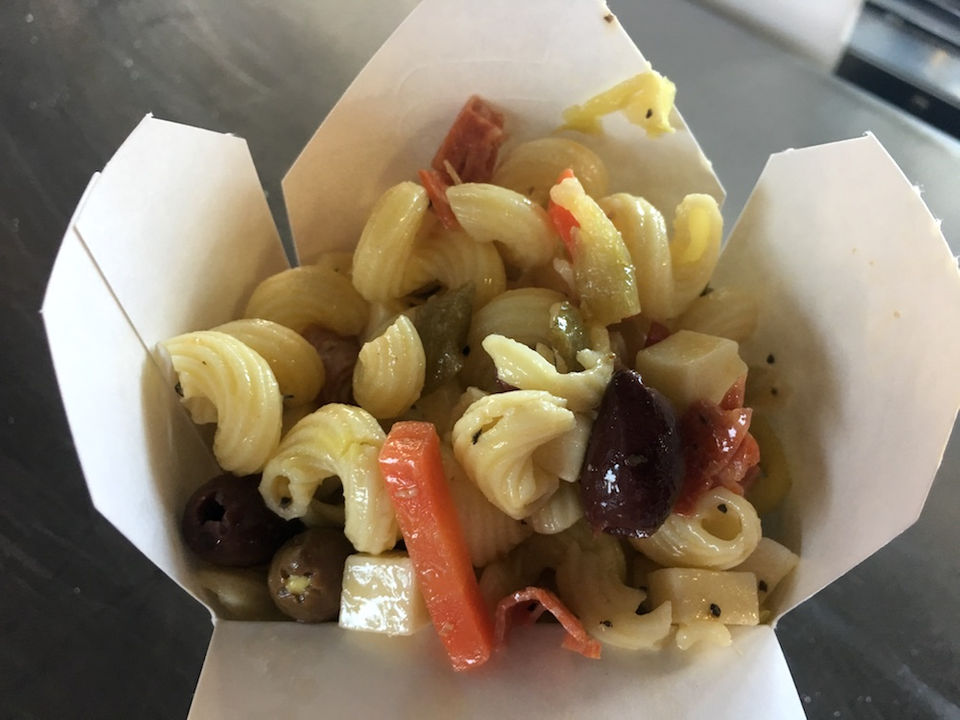 Rodriguez says: One of the best antipasta salads I have had. I wish this was all we ate that day because I would have eaten the entire container. It was fresh, light and had a great balance of flavor. 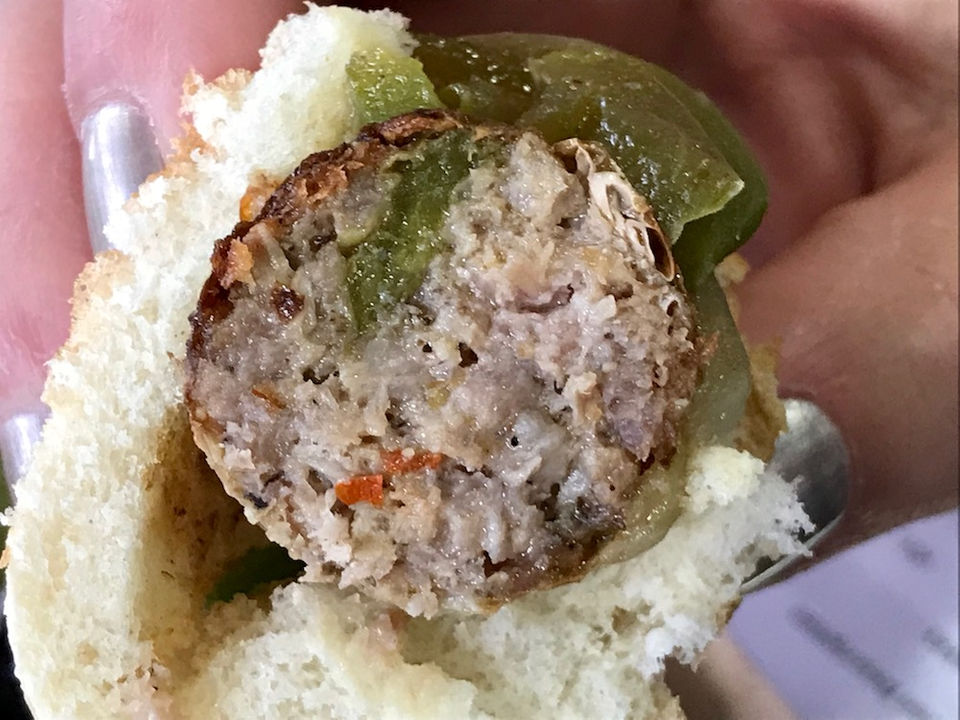 Cain says: Rich meat flavor! And embedding the peppers and onions into the sausage is ingenious because you get so much more flavor that way. I want another!

Rodriguez says: Yum! Lots of peppers and onions that were cooked perfectly. The sausage itself was outstanding. No need for added toppings on this one. The taste throughout was delicious. Well worth a visit to this stand regardless of where your seats are. 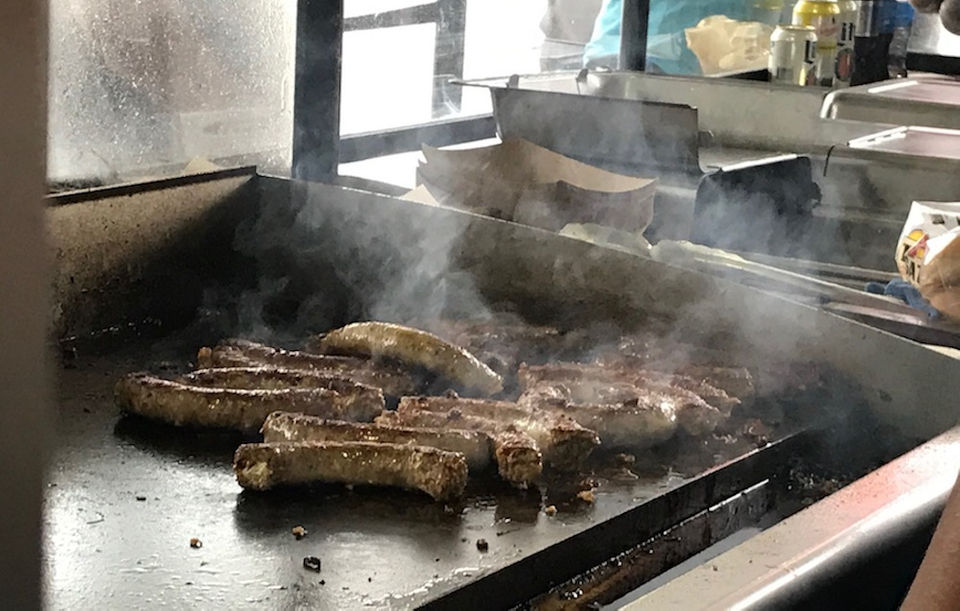 Take a look at those sausages grilling…yum!