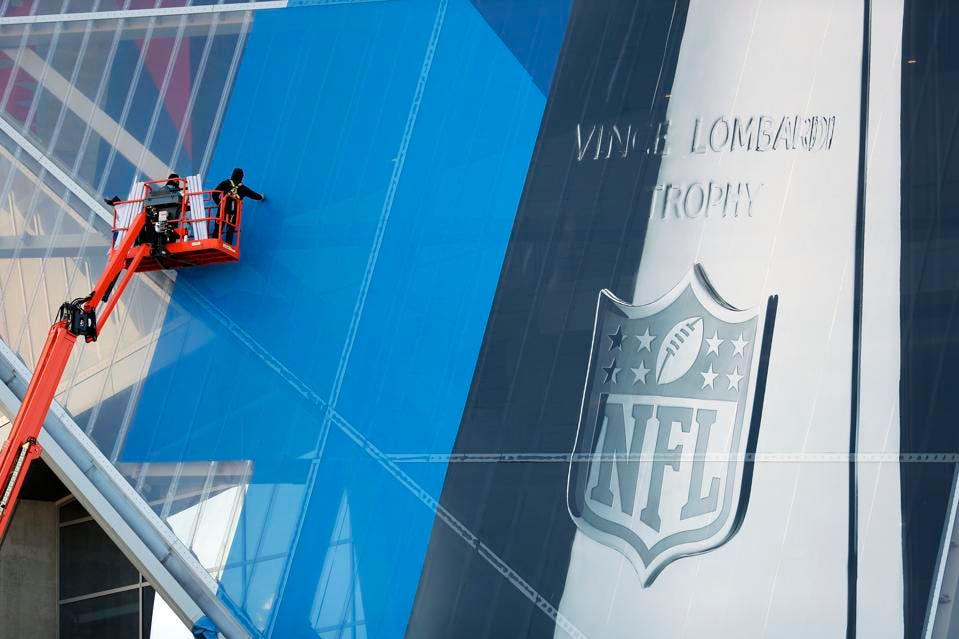 Prep for the Super Bowl at Mercedes-Benz Stadium in Atlanta. (AP Photo/John Bazemore)

Ever since Mercedes-Benz Stadium opened in Atlanta in 2017, the fan-first concession pricing has turned heads. That pricing doesn’t change, whether a Falcons game, a concert or even a Super Bowl. Hot dogs are $2. Refillable sodas: $2. But what we will see for the first time at a Super Bowl on Feb. 3 hasn’t quite caught on everywhere else. But it doesn’t mean it won’t in the future.

Since opening the doors to MB Stadium, AMB constructed a new-in-class business agreement with concessionaire Levy. Instead of the traditional model that allowed a concessionaire into a revenue-sharing deal with the team — which often drives up prices — a fixed-price contract gave control to the team.

So, even with a nearly 50 percent drop in food prices compared to the Georgia Dome set-up, fan spending increased 16 percent since the launch with a 53 percent increase in the volume of sales.

“This shows us that fans appreciate the value proposition and quality being offered with our new food and beverage program,” Beadles says.

Along with pricing, the model allows for variety and speed. Not every item in the Super Bowl venue comes with a low-price ticket, allowing fans to choose from their refillable soda and inexpensive hot dog or to hit up one of the local restaurants still represented inside the concourse and spend a bit more on something more unique. Still, though, expect about a dozen items at $5 or less, including $5 cheeseburgers and $3 nachos.

With 30 percent more total transactions in the first full year at MB Stadium compared to the previous year at the Georgia Dome, staff has started setting records, such as 120,357 total food and beverage sales transactions at the College Football Championship game in January 2018. 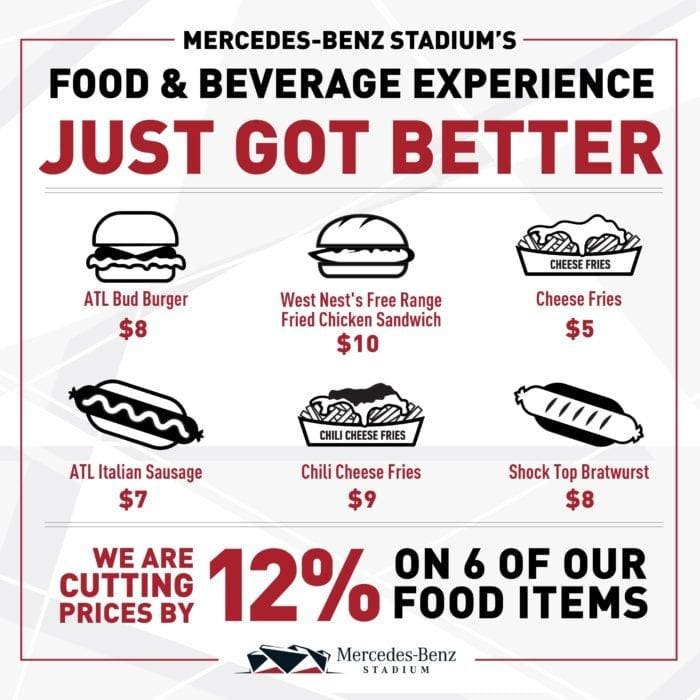 In 2018, MB Stadium further reduced prices by 12 percent on six of the more popular premium food offerings and introduced an exclusive craft beer in partnership with a local brewery at the same price of a domestic draft, $5 for a 12-ounce and $7 for a 20-ounce.

With pricing at a reasonable scale and variety still locked in throughout the venue, fans have started showing up earlier to games, are spending more (they are also spending more in the retail stores) and buy more often. And all along the way, Beadles says, the stadium continues to get feedback from fans as it evolves its offerings, lopping off underperforming items and bringing in fresh offerings.

“This action has driven a 23 percent higher consumption rate on the (new) items,” he says. “This is just one example of looking to innovate continuously and put our fans first as we strive to maintain our top ranking across the leagues and provide the ultimate event-day experience.”

While this new trend hasn’t created a firestorm across the country yet, it still may. Already it is the norm in Atlanta, as neighboring State Farm Arena now has a similar model in place, which pushed an 80 percent growth in volume compared to the season before.

Mike Plutino, founder of the Food Service Matters consultancy, says he expects many other teams will embrace the fan-first model once contract renewals allow. “Many teams,” he says, “are handcuffed by short-sighed, high-commission concession deals that have limited their editorial control over one of the most important aspects of their fan experience, second only to their team product.”

Not only has the Mercedes-Benz Stadium model proven a financial success, but it has also propelled the Falcons to the top of the NFL’s customer satisfaction ranking system, a win-win for the team.

“We are thrilled to lead by example on this initiative,” Beadles says, “and there’s nothing better for the sports industry than when we can truly do something that makes sense from a financial perspective and it puts the fan first.”