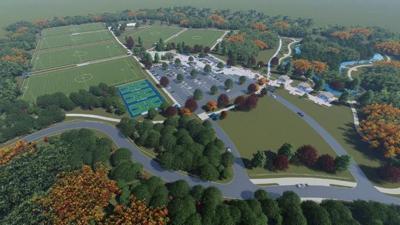 The Sports Tourism Commission approved an agreement with Sports Facilities Management LLC. on Wednesday for the company to manage the Greenway Sports complex.

Paducah, KY. – McCracken County Sports Tourism Commission has agreed to terms with Sports Facilities Management, LLC for the company to manage the Greenway Sports complex. The move came on Wednesday after two months of contract negotiations with some of the commission members and SFM representatives.

The agreement allows SFM to manage the day-to-day operations of the Greenway Sports complex, an outdoor sports facility that is planned for the old Bluegrass Downs site. SFM would assist the city and county in the planning and development stages of the complex as well as help get tournaments and events booked for the facility.

The commission chose to work with SFM after hearing presentations from three companies, including SFM, in September.

Jim Arnold, SFM national director of business development, walked through the basics of the agreement with members of the Sports Tourism Commission via Zoom. Arnold said SFM employees would handle day-to-day operations. SFM would provide input and opinions about decisions regarding topics such as development, sponsorships and the selection of a general manager for the commission to consider, but final decisions would be up to the Sports Tourism Commission.

Arnold told the commission members how SFM would work with them to make sure the Greenway Sports complex is successful from the first day of operations. One of the big things SFM would help with, Arnold said, is to have some events booked for the facility before it opens its doors. Arnold said SFM would work to make sure it is meeting what the Sports Tourism Commission would define as a successful operation.

“The intent here is that everything is in this room that needs to be done to not only get the facility open successfully, but operating successfully, and we will make sure we do whatever is needed,” Arnold said.

Sports Tourism Commission Chairman Jim Dudley was pleased to see the agreement approved, and has been satisfied with his interactions with SFM so far. He said even before the two groups reached an agreement, SFM set up a meeting between Dudley, Vice Chairman Chris Hill and representatives of Baseball USA to discuss the possibility of hosting baseball tournaments at the Greenway Sports complex. Dudley said he thinks SFM’s experience with other facilities will be beneficial moving forward.

“Obviously, this is what they do. They manage over 100 facilities across the nation. [There is] a lot of expertise there, a lot of people you can lean on, and we just felt moving forward we wanted that extra teammate to guide us through the construction phase and all the way to being ready for day one,” Dudley said.

Per the agreement between the Sports Tourism Commission and SFM, a copy of which was provided to The Sun, the contract is effective for eight years after the grand opening of the sports complex. SFM is required to produce an annual business plan to the commission prior to each operating year, which the commission can approve or send back to SFM for improvements. SFM will also provide monthly reports to the Sports Tourism Commission.

The contract between the commission and SFM lists tentative plans for the Greenway Sports complex to be up and running by the end of June 2023. This date could be delayed depending on development and construction factors.

The 105-acre development is planned to have softball, baseball and soccer fields, and will bring in an estimated 81 tournaments and more than 7,000 players once it is completed, according to greenwaysports.com. The complex’s projected costs are between $38 million and $42 million, according to previous reports from The Sun.

Dudley said the next step for the outdoor sports complex is to complete an interlocal agreement between the city of Paducah and McCracken County that will finalize the memorandum of understanding the city and county reached earlier this year about financing the project. Dudley hopes this agreement will be completed within the next two months.