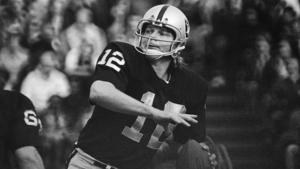 The Park District of Highland Park, IL. has scrubbed its tackle football program this fall due to a drop-off in participation attributed to concerns about the risk of head injuries.

“Our enrollment declined so much with everything that has been going on in football that the tackle program will not be taking place in 2017,” said Liza McElroy, executive director of the park district, during a park board meeting Tuesday.

McElroy said the traveling program drew more than 150 participants at its peak. “We fielded a ton of teams and Little Giants has always been a big tradition,” McElroy said.

However, the number of registrations dropped to 54 in 2015 and to 33 in 2016. This year, the program — set to take place from August through late October — was canceled after the number of participants dropped to 11.

“People are not playing tackle football anymore,” observed McElroy, noting that fall baseball enrollment has more than tripled in the past two years.

The downward trend seen in tackle football has not carried over to the park district’s flag football program for first through eighth graders. In flag football, instead of tackling players to the ground, a defensive player removes a flag or flag belt from the opposing team member who is carrying the ball.

One park district commissioner raised concern that players who haven’t been taught how to properly block or tackle before high school might be more prone to injuries on the football field.

“I don’t know what statistics would show, but that would seem to put a lot of pressure on coaches,” said Terry Grossberg. “I think it would lead to more injuries at the high school level if the kids go out inexperienced in how to hit or how to tackle.”

Christine Gonzales, director of communications for Township High School District 113, said the downward trend is not as evident at the high school level.

“We have been able to maintain healthy numbers in our football program throughout the years, and we do not expect this to change,” she said.

Addressing the concussion issue last year, park administrators said the agency was following the recommendations of its liability insurance carrier, the Park District Risk Management Agency, and providing outlets for prospective players and parents to learn about the associated risks.

“For higher risk sports such as tackle football, staff has expanded awareness and implemented safety measures that help to prevent, assess and manage concussions,” noted park administrators last fall in a memo.

The park district had adopted the Heads Up Football program of USA Football, a youth football development partner of the National Football League. Among other things, the program instructs coaches on safer tackling and blocking techniques to lessen the risk of head injuries and raises awareness to concussions, according to the park district.

The Central Suburban Youth Football League, which also uses the Heads Up program, has provided a certified trainer at games to handle possible head injuries, according to the park district.

The Youth Sports Concussion Safety Act signed into law by Gov. Bruce Rauner in 2015 added new requirements for both school and park districts.