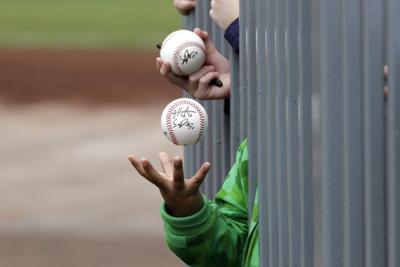 A child tosses an already-autographed baseball while awaiting another signature from a passing player before a spring training baseball game between the Los Angeles Angels and the Seattle Mariners in March. Doctors, scientists and sports leaders are outlining the path back to playing fields for children in grassroots sports — an exercise that could inform major organizations on how to get their industries up and running as well in the midst of the COVID-19 pandemic.

Doctors, scientists and sports leaders are outlining the path back to playing fields for children in grassroots sports — an exercise that will help inform major organizations on how to get their industries up and running as well amid the COVID-19 pandemic.

From New Zealand to Austria to the northwest corner of Utah, leaders are releasing regulations that have potential to impact everything from workouts at gyms to youth baseball leagues to elite-level training with an eye on the Olympics.

The U.S. Olympic and Paralympic Committee distributed a seven-page set of guidelines of its own this week that called on participants to “self-monitor for symptoms of COVID-19 twice daily,” as one of several steps in a multilayered return scenario.

“In addition to the logistical challenges of returning to training following COVID- 19, there are also ethical and societal considerations that are beyond the scope of this document,” USOPC chief medical officer Jonathan Finnoff wrote in a nod to the uncharted territory that all sports are trying to negotiate.

The guidelines are being developed as some major pro leagues, including the NBA, target return-to-practice dates, while others, such as Major League Baseball, float ideas about starting or resuming their seasons in upcoming weeks. All these plans need some sort of signoff from health and government authorities, who themselves are looking at models of what sports will look like on a grassroots level — a calculation that has potential to impact decisions all the way up the chain of sports.

All entities are developing their plans with the knowledge that lives are at risk and that a single outbreak among teammates or training partners has the potential to shut down a facility — or derail an entire season.

The guidelines reviewed by The Associated Press had several things in common:

n All returns will begin with individual training or in very small groups.

n Very few spectators, if any, will be allowed. The USOPC also released a 13-page guide about sports event planning that asks, among other questions, “Can the financial risk be mitigated through means such as event insurance, establishing financial impact timelines for cancellation, reschedule the event for a later date, or negotiate a contract that limits negative financial impact?”

n Almost every participant will be subject to temperature checks and some sort of verification that he or she is healthy and hasn’t been in recent contact with anyone who has COVID-19.

n Participants will be grouped in ‘bubbles’ — allowed to train with a specific group of people that will not change until restrictions are relaxed further.

n One key facet will be keeping track of it all — a role that private groups such as Utah-based Great Coach are trying to fill by offering apps, blogs and other online solutions that will help monitoring.

“The governors and president can say what they want, but when it comes to kids and amateur sports, the only way it’s going to happen is when parents feel like it’s safe for their kids to play again,” said Great Coach founder Bill Kerig, who estimates 45 million children participate in recreational sports across America.

A few test models are developing in Utah, where health authorities in the Logan area recently put out detailed guidelines of circumstances under which fitness centers can reopen, while organizers around Park City also try to develop scenarios for a return to play.