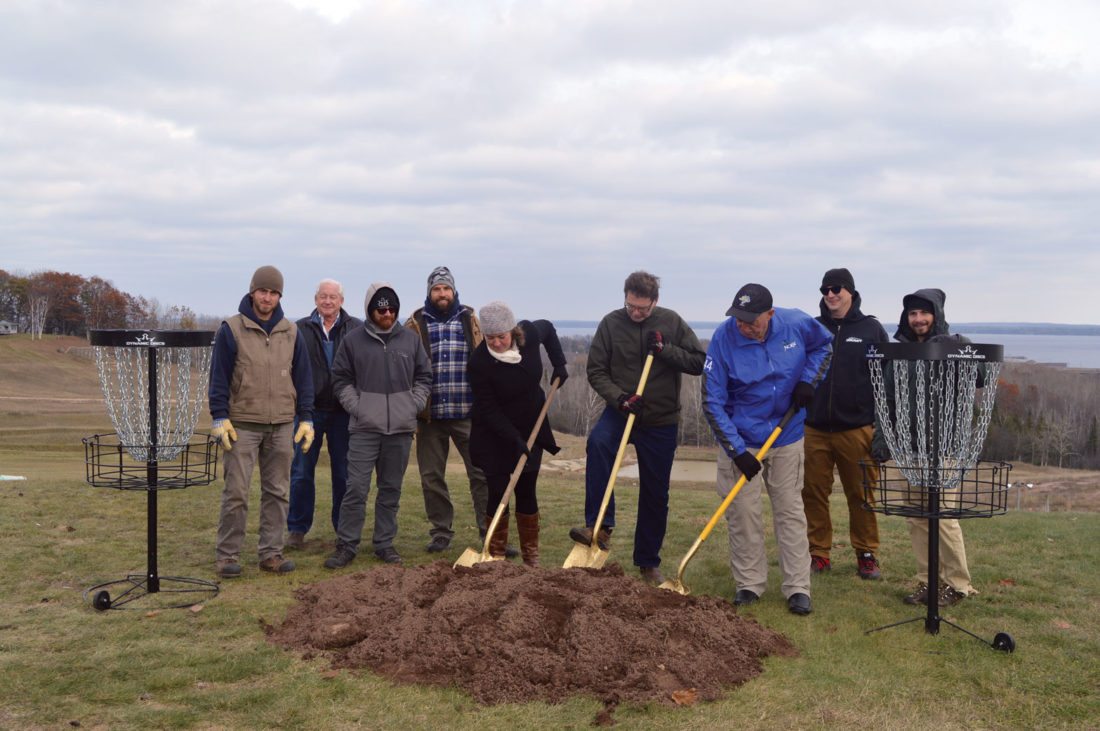 GLADSTONE, MI — People involved with efforts to develop a new disc golf course in Gladstone took part in a groundbreaking ceremony for the course at the Gladstone Sports Park Wednesday afternoon.

According to Jon Harris, co-chair of Noc Bay Flyers Disc Golf Club, the project has been in the works for well over a year.

“We started discussing this in March of 2016,” he said. Noc Bay Flyers is hoping the course will be ready for public use in late May or early June of 2018.

2010 Disc Golf World Champion Eric McCabe of Dynamic Course Design, who created the layout that will be used for the new course, attended Wednesday’s ceremony.

“About a year ago, I flew out here just to look at some land,”he said. At that time, he and members of Noc Bay Flyers determined the Gladstone Sports Park would be an ideal location for a new disc golf course in the area.

Harris agreed with McCabe’s assessment of the location.

“The Sports Park is just made for disc golf,” he said.

Noc Bay Flyers President Robin Holmes said Gladstone’s new course will be among the best courses in the area.

“It’s (going to) be one of the nicest disc golf courses in Michigan and northern Wisconsin,” he said.

The Sports Park disc golf course should be enjoyable for both veteran and amateur disc golfers, McCabe said.

“All skill levels are (going to) be able to come out and have a good time,” he said. The course will feature a 27-hole layout, with two tee pads and two baskets at each hole.

To fund the establishment of the course, Noc Bay Flyers organized a crowdfunding campaign earlier this fall. This campaign, which had a funding goal of $25,000, was run through Michigan-based website “Patronicity.”

About 170 people and groups contributed more than $27,000 to the campaign — including the Community Foundation for Delta County, which presented its donation of $10,000 during the ceremony.

“This is something that we feel really passionate about,”Community Foundation for Delta County Board Member Robert VanDamme said.

Thanks to this support, the project was awarded a matching grant through the Michigan Economic Development Corporation’s “Public Spaces, Community Places” program.

“It was just amazing to see the interest in this whole thing,”Assistant Director of Gladstone’s Parks and Recreation Department Jason Davis said. The city served as a liaison between Noc Bay Flyers and Patronicity.

Davis said he was glad to be able to play a role in bringing the course to the area.

“We’re stoked about having it here in Gladstone,” he said.

Harris gave his thanks to the people who made this project possible.

“This couldn’t have happened without the community (and) the city of Gladstone,” he said.