While visiting Yankee Stadium on a Thursday for Game Day, I was disappointed to see that the food choices at the concession stands hadn’t changed since the 2010 season. One would really think that they could have found the time to bring in a good taco stand.

Alas, I’ll have to stick with my tried and true favorite this season in the Bronx: the footlong all-beef Hebrew National hot dog with a dollop of mustard and a healthy scoop of kraut.

Luckily for some of the rest of you,  there are some interesting new foodstuffs at your local ballpark. While I’ve only been able to taste a couple of the new snacks and stuff showing up around the majors, there are several dishes that piqued my interest enough to collect them in the following  listicle.

In no particular order, here are the top 10 NEW concessions that baseball fans can order around the big leagues in 2013:

1. Pulled Pork and Pierogi Stacker, PNC Park, Pittsburgh: This tasty towering treat is a contestant in a Pirates fan poll this season at PNC Park. The stacker consists of pulled pork atop of a pretzel roll with caramelized onions and two potato pierogi for good measure.

The $8 sandwich will be sold alongside the Stuffed Pepper Hoagie, a banana pepper filled with sausage and cheese, served on a hoagie roll that’s doused with marinara. Fans will be able to vote on their favorite concession up to the All-Star Break. Winner stays on the menu, loser hits the dumpster out back.

2. Red White and Blue Steak Sandwich, Great American Ball Park, Cincinnati: This gargantuan beast features sliced steak, Maytag blue cheese and sweet and spicy Peppadew-pepper mayonnaise and is served on a baguette. It was created in the Food Network kitchen and is actually available in several different parks this year. It’s a steep $12 at GABP but it costs a whopping $14 at Busch Stadium. Apparently St. Louis Cardinals fans are willing to pay a bit extra for the privilege of eating a sandwich that Guy Fieri presumably signed off on. 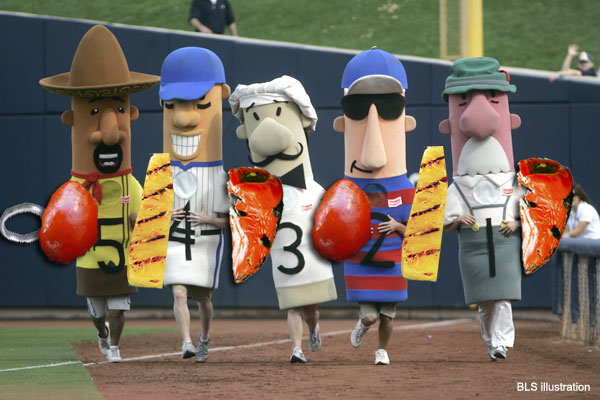 3. Racing Sausage Kabobs, Miller Park, Milwaukee: Bonus points for these skewered sausages because they are the creation of a fan in a concession contest. In a stroke of genius reminiscent of Top Chef, Brewers fan Courtney Ring decided to poke a couple sticks through the famed Racing Sausages, (bratwurst, Polish, Italian, chorizo and hot dog) and grill them up with some veggies. Sounds delish!

Just keep Randall Simon away from the grill, Courtney.

4. Peanut Butter Kandy Kakes, Citizens Bank Park, Philadelphia: The Tasty Baking Company, like John Kruk, is a fattening and beloved Philadelphia treasure. Their line of Tastykakes products, including Chocolate Cupcakes, Butterscotch Krimpets, and the Peanut Butter Kandy Kakes, will be sold at Phillies games this season after Aramark installed special countertop coolers to keep the icing from melting into a pile of goo. Everyone has a favorite Tastykake but the peanut butter varietal stands out to me for…well… its peanut-butteriness. These will run you $2.50.

5. Steamed bun and Thai salad, AT&T Park, San Francisco: Always ahead of the curve on the concession front, the good people at AT&T Park are pairing two Asian cuisines in one dish. Giants fans will be able to nosh on a Chinese-inspired steamed bun, or bao, along with a Thai vegetable salad. The key to making interesting ballpark food doesn’t have to be absolute authenticity to foreign cuisines. Just embrace the cuisine, borrow from it, and adapt it. Kind of like how the Giants “adapted” Aubrey Huff(notes)to patrol right field.

6. Vienna Beef hot dogs, Wrigley Field, Chicago: Here’s some good news forKerry Wood(notes) and his wife (right), who once visited the Vienna Beef headquarters to learn how their sausage was made: For the first time since 1982, Cubs fans will be able to chow down on local, 100% all-beef wieners.

The Ricketts family kicked Ball Park franks to the curb in favor of Chicago-based Vienna Beef, who will also offer five specialty dogs: the Taco Dog, Frito Dog, Deli Dog, Nacho Dog, and the Heater — a hot dog topped with blue cheese coleslaw, celery salt and buffalo sauce. Heck, I haven’t seen that many dogs in one stadium since the last Paws in the Park.

7. Danny Meyer’s Genius, Nationals Park, Washington: You’ll have to wait until June for the biggest concession move of the 2011 season. Successful New York City restaurateur Danny Meyer, whose snack concepts revolutionized the outfield concourse at the Mets’ Citi Field, is taking his talents down I-95 to Nationals Park. He’ll be opening a barbecue joint, a Belgian-style frites bar, an authentic taqueria, and a D.C. outpost of the famous burger joint, Shake Shack. That’s quite a salve for the Nats fans hurt by Five Guys’ recent departure.

8. Bacon-wrapped BBQ Dog, Busch Stadium, St. Louis: This creature is a true paean to calories, fat and cholesterol. Only in Missouri would it make perfect sense to wrap a hot dog in fatty bacon and smother the whole thing with baked beans and tangy barbecue sauce. Season ticketholders beware: Buy one of these mothers per game in 2011 and you won’t even be around to see if Albert Pujols(notes) signs a long term extension with the Cardinals in the off-season. Bacon-wrapped BBQ dogs: A sometimes food.

9. Walk a Taco, Target Field, Minnesota: Despite their fans’ demand that they deep fry a taco on a stick, the Twins concession folks have taken the easy way out and brought in local vendor El Burrito Mercado and their Walk A Taco instead. In following the other Midwestern tradition of putting savory food in cones, Walk A Taco is essentially a taco salad in a crispy cone-shaped flour tortilla. It sounds delicious but also a bit dangerous. I’d wait for that thing to cool down lest you bite right into a hot molten volcano of cheese.

Also, it’s funny that these are called “Walk-a-Taco” since most of the Twins fans will be sitting on their behinds when they scarf them down.

10. Doyer Dog, Dodger Stadium, Los Angeles: Walk right past the new turkey burger stands in Chavez Ravine, friends. If you want the best new concession in L.A., try out the Doyer Dog, a spicy and much improved version of the Dodger Dog. It’s an all-beef wiener smothered with chili, nacho cheese, chopped tomatoes, onions and jalapenos.

I sampled my first ever Dodger Dog at this notorious Dodgers loss back in 1990 (check the ninth inning in the linescore) and I was not impressed. But, I suppose one could smother a piece of cardboard with chili and jalapeno peppers and that corrugated meal would taste pretty good. ¡Viva los Doyer Dogs!

Rob Iracane is a contributor.