The Crossbar at Amesbury Sports Park is opening on Saturday. 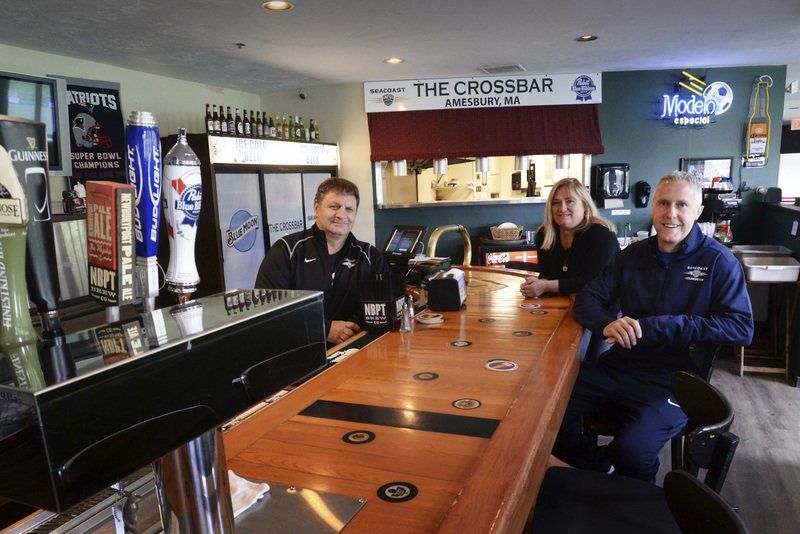 Coming up on his soccer club’s first anniversary operating out of the location formerly known as the Amesbury Sports Park, Seacoast United Vice President and COO Ian Burgess breaks down his approach to doing business very simply.

“We want to do more for you than you do for us,” Burgess said. “If you work with us, we are going to make sure that you get more benefits from it than we do and we are a partner for a long, long time.”

Well known within the local soccer and athletic world in general, the Seacoast United brand name carries with it a sense of stability for the 22-acre South Hunt Road site, which had seen financial problems under prior management.

The Amesbury Sports Park was put under a cease-and-desist order by the city for wetlands violations during the summer of 2014 when runners in a partnering special event were found to have been navigating through neighboring wetlands and private properties, including a capped landfill. The site was then renamed the New England Sports Park after the company that operated the Amesbury Sports Park, Event Partners LLC, declared bankruptcy in 2015. It was sold to Seacoast United last summer when the soccer club formed the U9-U18 Seacoast United Admirals.

Seacoast brings with it over 20 years of experience developing young soccer (and now baseball and field hockey) players in over 10 facilities in three different states. The Amesbury facility represents the company’s first Massachusetts location, with another to open in Framingham soon.

“Every club that we have grown, we wanted them to have a home,” Burgess said. “We have probably got about 16 guys who go into the communities to support the growth of soccer. We will go in and work with your coaches, we will run a few sessions because we want to help you get more kids playing soccer.”

Knowing that being a successful business also means being a good neighbor, Seacoast has always stressed community outreach and marked their arrival in the city last year by reaching out to the Amesbury Soccer Association.

“We will do whatever they need,” Burgess said. “We have sent staff down to help with their tryouts. There can be a lot of contention during those where you have parents there saying, ‘My son! No, my son!’ So we come in there and put in a bit of professionalism toward it and take away the politics. We take the strain off their board of directors and coaches by taking the politics out of it because that is what kills local sports.”

Along with the park’s 41/2 acres of artificial turf fields, Seacoast also now owns the site’s two-story function room and restaurant facility that will be opening its remodeled Crossbar Pub with a day-long family event this Saturday.

Having been with Seacoast since coming to the United States from England in 1997, Burgess has spent plenty of time negotiating with cities and towns and said that he is very glad to be doing business in Amesbury.

“We have been through a lot of town meetings, just based on the facilities we already have,” Burgess said. “This has clearly been the best. The mayor has been fantastic and the police and fire departments. The alarms had been going off every couple of days here and they were wonderful. The fire chief has been good to work with.”

A Seacoast parent himself, Crossbar general manager Frank Annaldo added, “If you don’t have the community working with you, then you are already behind the eight-ball.

“That is our main goal, to do whatever we have to do for the community,” Annaldo said. “And Amesbury has already been the easiest, most accommodating town that I have ever dealt with. They will bend over backward for you. They all want us to succeed. They can see what we are doing and the differences we are doing to make the place look good. It is a lot of work.”

With less than a year in the city Seacoast has already hosted a number of fundraising events for local organizations free of charge; and while Annaldo admits that special events will once again be on the table, they will be run in a manner befitting the Seacoast name.

“They will be done within the rules and the parameters that the town gives us,” Annaldo said. “We will visit and talk to the neighbors before every event. I’d also rather just stay within our boundaries anyway. I don’t want to make the same mistake (the previous owners) made.”