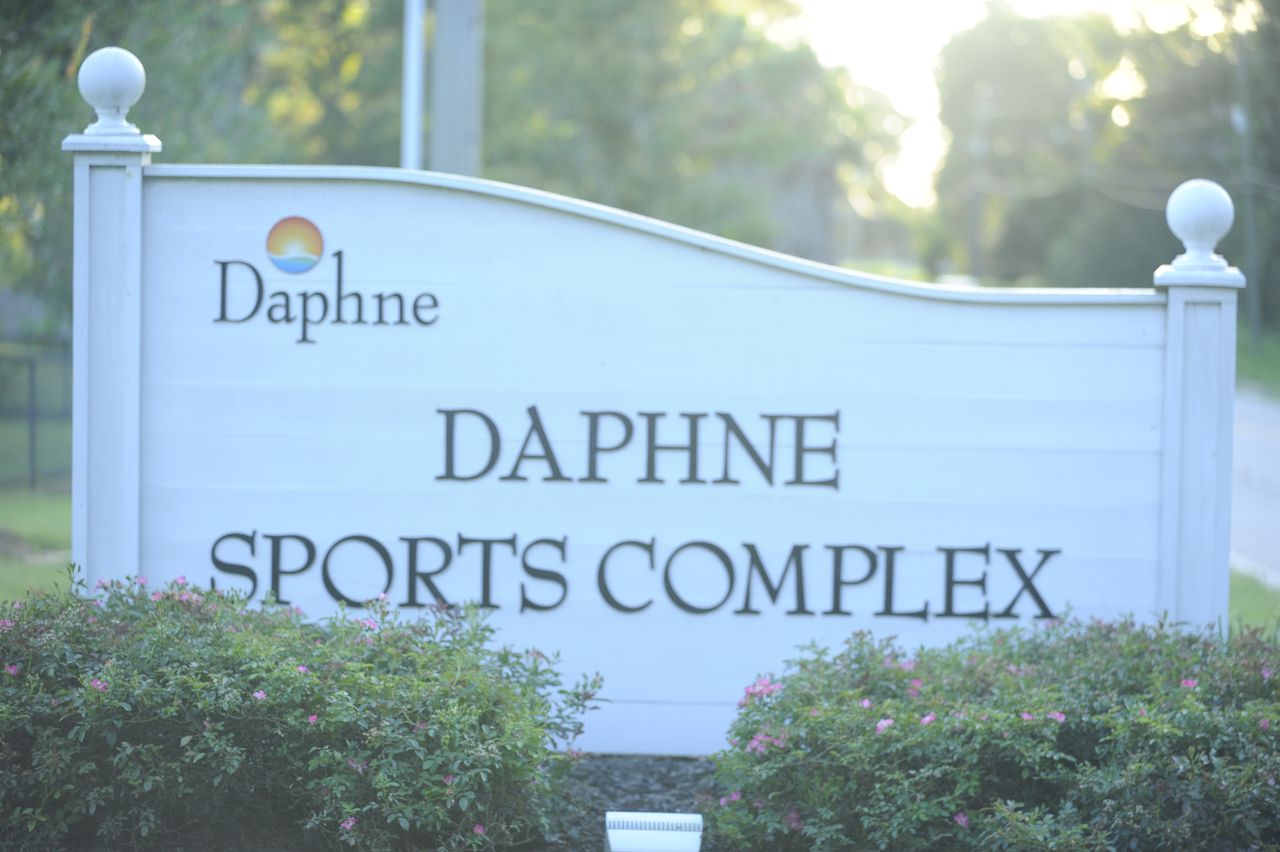 The entry into the Daphne Sports Complex in Daphne, Ala. The park opened in 2019, and consists of 11 ball fields. A $1.7 million federal grant through the American Rescue Plan Act will help fund the installation of recreational turf on 10 of the facility’s grass fields. (John Sharp/jsharp@al.com).

The baseball and softball fields are quiet at Daphne’s 3-year-old sports complex this month. On Wednesday, the only evening activity consisted of a few families gathering for batting practice.

“The whole month of July, we don’t use the fields at all,” Daphne Mayor Robin LeJeune said. “We need them to rest. This enables us to have more use of them (in the fall) and not cancel tournaments.”

City officials are hopeful a $1.7 million federal grant through the American Rescue Plan Act will allow the city to use the 11 fields at the Daphne Sports Complex year-round.

The U.S. Department of Commerce’s Economic Development Administration (EDA) announced Thursday that the city was awarded the grant “to boost sports tourism” by installing recreational turf at the city’s sports complex.

LeJeune said the federal money will be partnered with approximately $600,000 in a city match to finance the project. He hopes the entire allotment will enable the city to install recreational turf to all the ballfields.

“When we have heavy rains, we’ve had to cancel tournaments,” LeJeune said. “This enables us to have more use of the fields and not have to cancel tournaments. It also takes some of the maintenance pressure off (city workers) in keeping these fields in good health due to the amount of play them get on them. That’s a hard struggle for us with all of the amounts play on these fields.”

LeJeune said the complex’s T-ball field is the only one with recreational turf. He said the project will consist of installing the turf on one field at a time, and he hopes it can be completed by next summer.

“This will help continue make the improvements and to get more use out of the fields and then, in turn, provides more of an economic driver for the city’s hotels and restaurants,” LeJeune said.

Indeed, the grant’s application involved the city’s hotels. LeJeune said hotel managers wrote letters of support for the project, given the popularity of sports tourism and the visitors it brings into the cities like Daphne.
Economic development officials, U.S. Sen. Tommy Tuberville and U.S. Rep. Jerry Carl, among others, also wrote letters in support that were included in the grant application.
“Anyone we could ask for help, we sure did,” LeJeune said. “We had city staff helping to write the grant. It was a group effort to show the economic driver that the sports complex really is.”

Carl, R-Mobile, in a statement said the money assists a fast-growing city in Alabama’s fastest-growing county. Daphne, according to U.S. Census figures, has a population of 28,777 residents, and has grown 33% since 2010.