Hamilton, OH – The Spooky Nook Sports Complex, Hamilton’s $144 million sports entertainment complex that is in its final stages of construction, suffered weather-related damage early this morning as the heavy wind gusts caused structural steel on one of the buildings to fall to the ground.

Some parts of Greater Cincinnati saw wind gusts above 50 mph, based on storm report information sent to the National Weather Service. Some areas of Dayton recorded gusts above 60 mph.

Executive Director of External Services for Hamilton, Tom Vanderhorst, said Friday that the developer of the project, “made a presentation during this morning’s Hamilton Community Authority meeting stating that the high winds during last night’s storm caused the structural steel in building 500 to fall.  He is not sure how it will impact the project’s schedule.  According to him, they will likely know more information mid-week after the structural engineers and insurance company examine the site.”

Spook Nook officials released a statement via social media to clarify issues caused by last night’s weather at the site.

“No one was on the property at the time and there were no injuries,” according to the statement. “Analysis of the cause and impact on the project schedule will occur over the next couple of days or week, at which time we can provide more information.

Once completed, the project is set to span more than 1.3 million square feet and will be the largest indoor sports complex in North America upon its planned December 2021 opening, according to Spooky Nook representatives.

Of the massive space, 700,000 square feet will be dedicated to the sports complex itself, with two turf fields, 10 hardwood courts, a small baseball facility, concessions and enough space to host up to 30 basketball games at a time included in the amenities.

The remaining 500,000 square feet will be dedicated to event space and a convention center capable of hosting massive gatherings and trade shows. 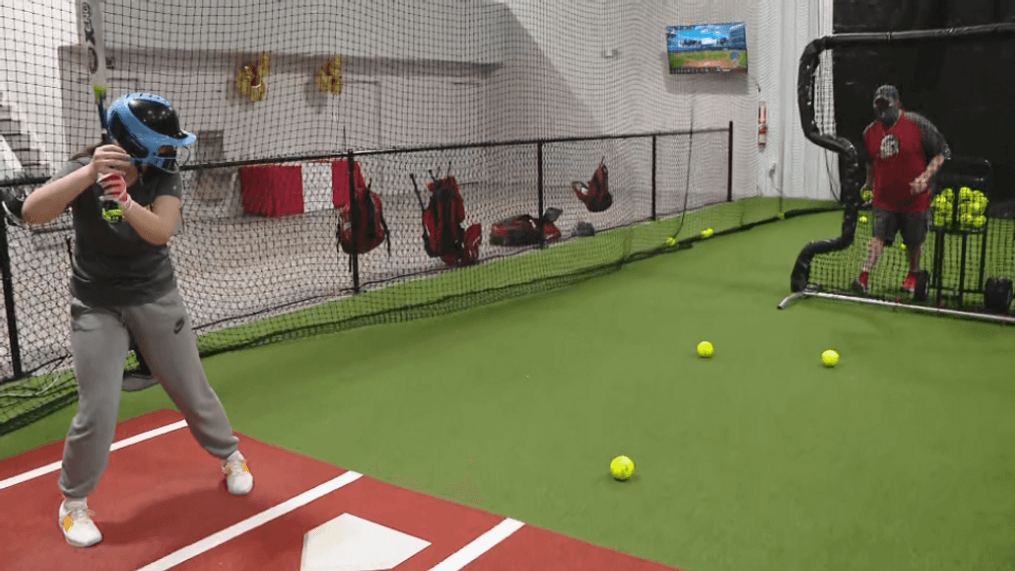 The new indoor facility is 7,200 square feet. It contains four batting cages, an indoor fielding area, a pitching area, and other amenities.

Legacy Sports Park also owns and operates three sports fields next to the facility. All facilities are located just on Henry Clay Blvd just off Rt.31 in Clay.

Co-owner Melvin Dorta played in the MLB for the Washington Nationals.

The facility is home to multiple baseball and softball teams named, the MAD Baseball.

Athletes can also rent cages for practice and can use state-of-the-art equipment to improve their play.

The facility can also be used for multiple other sports, such as lacrosse.

Greenville, TX.- Local residents will have the chance Saturday night to relive the fun of watching a drive-in movie, complete with refreshments, for free.

The City of Greenville Parks and Recreation Department is hosting a showing of “Trolls World Tour” at the Greenville SportPark.

The description of Trolls World Tour: “When the Queen of the Hard Rock Trolls tries to take over all the Troll kingdoms, Queen Poppy and her friends try different ways to save all the Trolls.”

In-N-Out is sponsoring the event by providing 350 meals which will be issued on a first come, first served basis.

The movie is scheduled to begin at sundown and will be presented on a screen set up in the parking lot with the sound provided on an FM radio channel available in the vicinity.

The Parks and Recreation Department has previously offered drive-in showings of “Trolls” and “The Amazing Life Of Pets 2” at the SportsPark.

The county’s health office expects to vaccinate 1,000 to 3,000 residents per day at the UWM Sports Complex at 867 S. Boulevard E., which has the capacity to take up to 5,000 appointments per day, if enough of the vaccine becomes available, a Friday news release notes.

“We’re humbled at the opportunity to help our community in Oakland County,” Mat Ishbia, president and CEO of UWM, said in a Friday statement. “The vaccine is the light at the end of the tunnel, and we’re proud to do our part in ensuring community members have easy access to get vaccinated and play a role in protecting themselves and their loved ones.”

As of March 17, over 284,000 Oakland County residents had received over 440,000 doses of the COVID-19 vaccine. Additionally, nearly two out of every three Oakland County seniors 65 and older have received at least their first dose, officials said.

“The UWM Sports Complex will give Oakland County Health Division the capacity to vaccinate thousands per day and will be accessible to many residents,” added Oakland County Executive Dave Coulter. “Thank you to the United Wholesale Mortgage team for working with our Emergency Management and Homeland Security Department to stand up this vaccination site.”

UWM said vaccinations will be offered at the complex by appointment only. Oakland’s health division will pull appointments from its Save Your Spot list. Currently, about 6,000 individuals are registered, officials said.

Budget limitations are commonplace for many small communities. This was the case for the township of West Bloomfield, Michigan, as they began planning for improved dugouts for players and coaches.

Initial quotes for block and metal dugouts were proving to be too expensive, so they turned to Beacon Athletics to see if there were other options. What West Bloomfield was looking for were dugouts that would be strong, provide shade for teams, and be easy for park staff to add and remove shade coverings — all while still remaining low in cost. They needed a fresh look at things, an innovative solution.

Beacon’s dugout shade screens look great. And they are holding up great, as well. 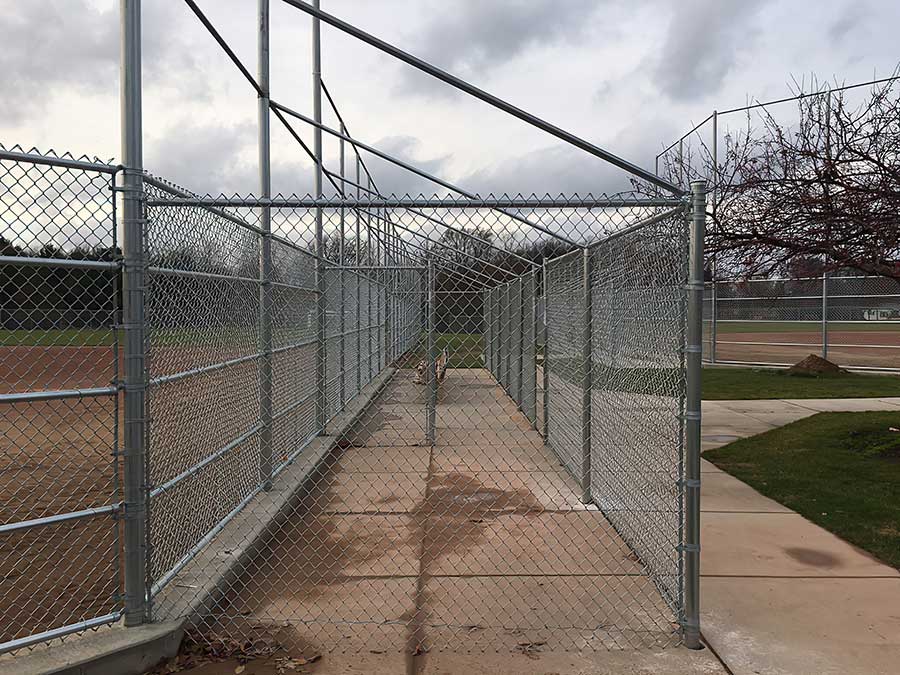 Working closely with the West Bloomfield Parks team, we designed a solution for both the top and sides of their existing chain-link dugouts. To do so, we needed to utilize customized windscreen materials to provide a highly-effective shade result but at a fraction of the cost of the block and metal dugouts. The Beacon team of engineers and designers provided a plan that added custom lines sewn to the screen for added strength, along with extra hemmed and grommeted lines sewn to the bottom of the structure. This corresponded with the support structure for the screen. 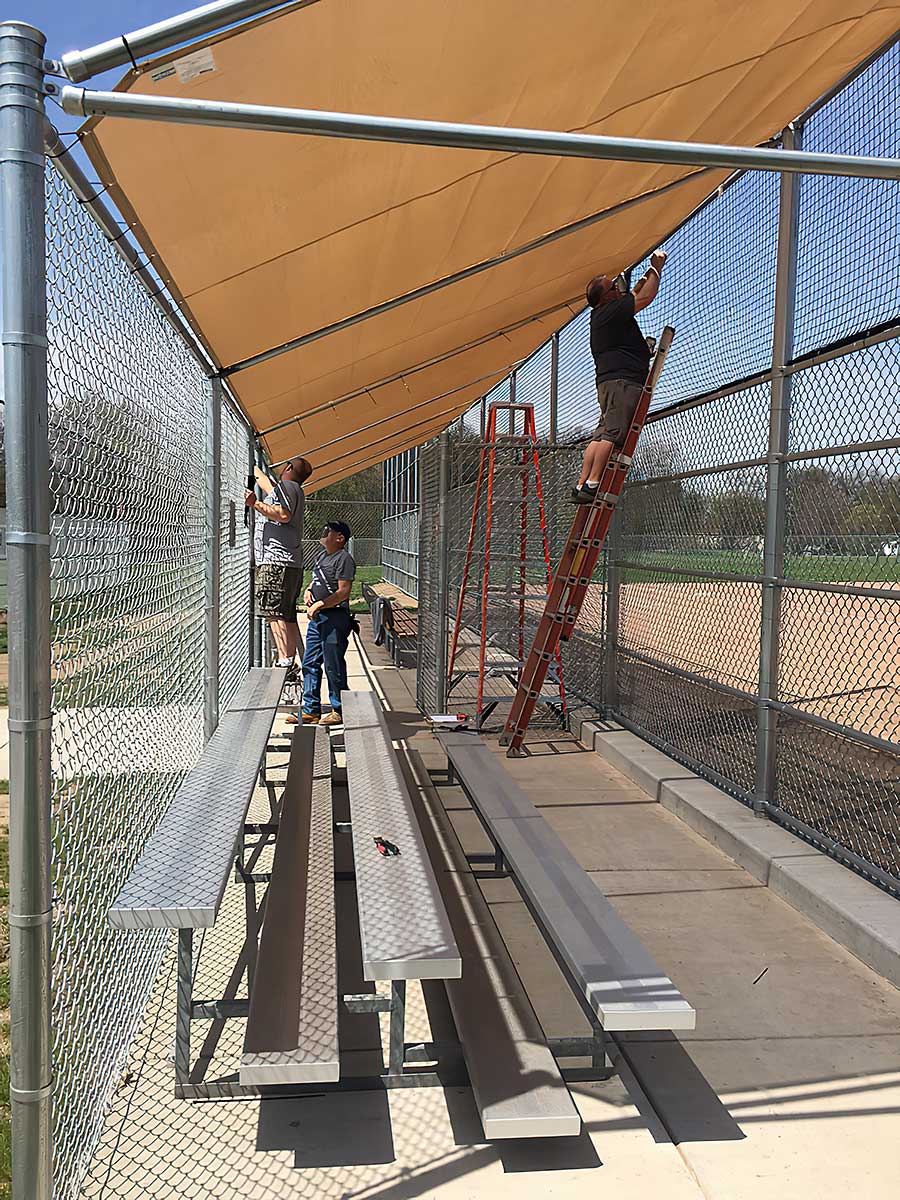 Innovative smaller cutouts in the corners of the shade screens made them very easy to install. To attach the windscreen shade coverings, cable ties were used so that the parks staff could easily remove them at the end of the season for safe, indoor storage. During the final steps of installation, Beacon reps arrived on site to assist and verify the custom windscreen shade structures were installed correctly and fit accurately to the design.

Weeks after the screens were in place, Chris Frey, the parks supervisor for West Bloomfield, reported back, “The shade screens look great and are holding up great as well.” The customized Beacon solution was a confirmed success for West Bloomfield — the perfect fit at the right price.

The new park includes sports fields, a children’s play area, and walking trails. The area offers scenic and elevated views of the community, and plenty of open space to get some fresh air while practicing social distancing.

Initial restrictions include limit on number of spectators; required mask wearing for fans, players and coaches

The announcement came the same day Gov. Doug Ducey said the state would move to the next phase of its re-opening plan. Ducey’s decision kept in place the mask and social distancing requirements for businesses, but it did drop the occupancy restrictions.

“This is exciting because it means our numbers are heading in a good direction,” said Pima County Health Department Director Dr. Theresa Cullen. “It’s been a tough slog for our community, but the number of new cases and deaths due to COVID-19 are steadily declining after a horrific surge over the holidays and early 2021. As we open up these facilities again, it is important that community members follow the guidelines laid out to keep those numbers down.”

If an event will have more than 50 people, the host must apply for a permit no later than 10 business days before the event. 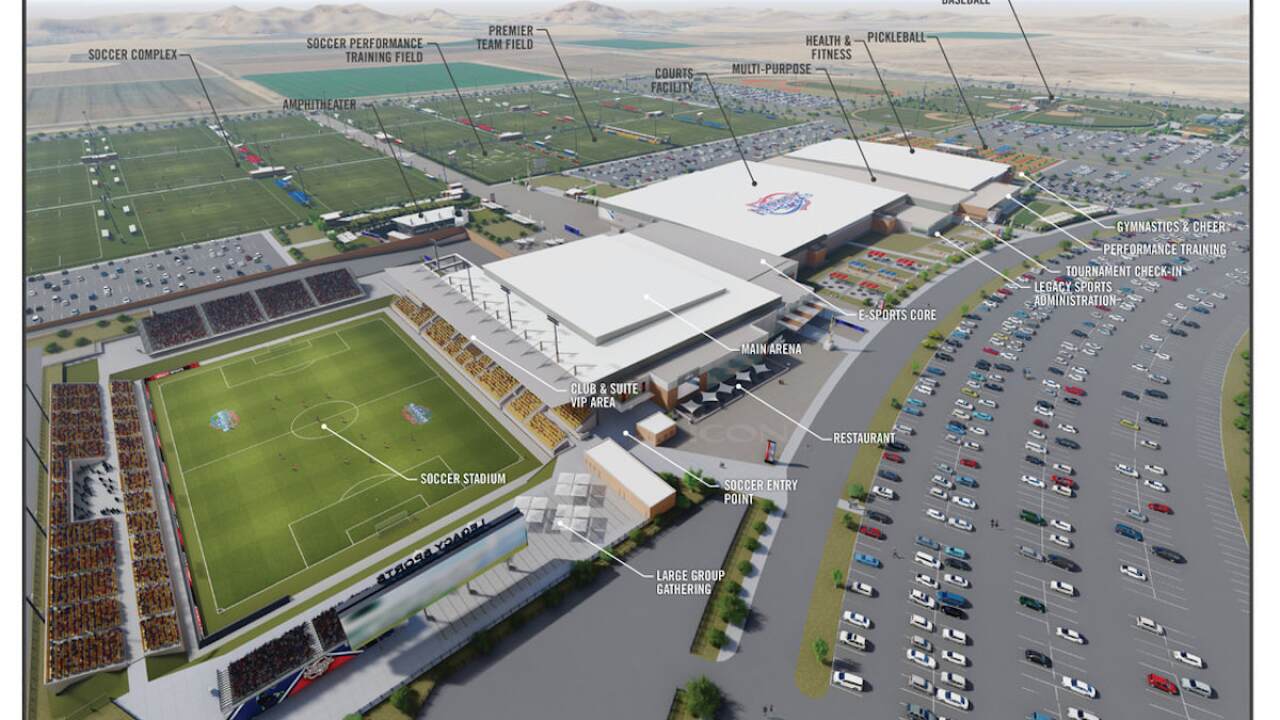 Los Angeles-based Oak View Group, the company contracted to manage and operate Legacy Sports Park, announced in February that Rodney Reese was hired to serve as the first general manager of the massive property.

Reese will work closely with Legacy Sports USA, the owners of the complex, in overseeing the construction of the property, scheduling the events, hiring staff and creating operating procedures for the execution of live events on the property. Once it is open, Reese will lead the day-to-day operations of the multisport complex.

When it opens in January 2022, Legacy Sports Park — on 320 acres at Ellsworth and Pecos, just east of Mesa Gateway Airport on the former General Motors Proving Ground — will be the largest privately-owned facility of its type in the country.

Legacy Sports Park is expected to be home to local, regional, state, national and international sporting competitions, as well as conventions, concerts and other large gatherings. The complex will include both indoor and outdoor facilities with dozens of fields and courts for nearly every sport imaginable.

Wednesday was a historic day for the Louisville Urban League, as the new $53 million indoor sports complex held its first track and field meet.

“It really means a lot for the track and field community because we finally have a place where we can go indoors and not be exposed to the elements when it’s winter,” said Bellarmine track student-athlete Shomari Rogers-Walton.

That’s just one of the many perks of the new Norton Healthcare Sports & Learning Center in West Louisville.

“It’s a game-changer for track and field, not only in Louisville but in the state of Kentucky,” said Bellarmine men’s cross-country and track and field head coach Chase Broughton.

The University of Louisville hosted the first indoor meet, the Lenny Lyles Cardinal Invitational, at the facility on Wednesday. The four-team event featured not only the Cards, but also Bellarmine, EKU and Notre Dame.

“I know our kids have been looking forward to it ever since we found out for sure that this was happening,” Broughton said.

The Louisville Urban League broke ground on the facility in 2019. And now, ASM Global-Louisville General Manager Eric Granger says the indoor facility is booked through March.

“Just shows you how successful this facility’s going to be,” Granger said.

The goal is to not just host successful competitions, it’s also to make a difference in kids’ lives.

“When I get older, I want to coach track and field,” Rogers-Walton said. “So it really means a lot that I’m able to come out here and perform for the youth and they can see that it’s possible to do the same things I’m doing.”

Broughton believes the new facility will have a positive impact on kids as well.

“Having it here in the city is going to get a lot more kids opportunities to start competing at a younger, earlier age,” Broughton said.