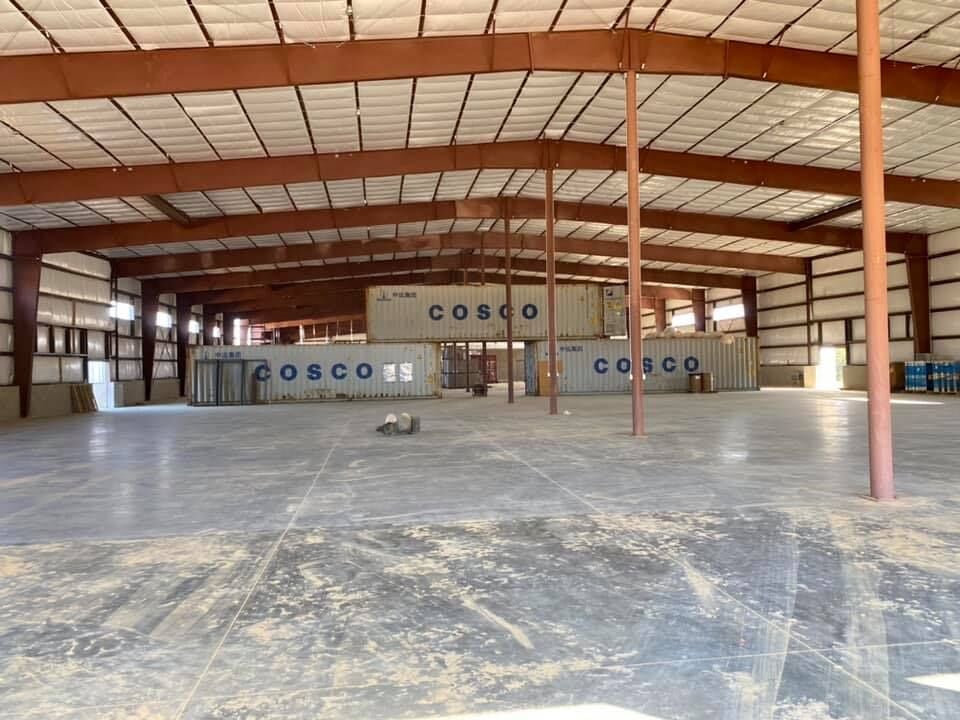 The Pepsi Company and its nationally recognized brand Gatorade are partnering with local developing sports complex The Fieldhouse, now called The Gatorade Fieldhouse.

The announcement was made Tuesday by developer and owner Greg Drumwright.

“The Gatorade Fieldhouse is already making its mark on Hernando and north Mississippi ahead of our 2021 opening. Before we’ve even opened the doors, we’re able to make a difference through collaborations with sponsors, who also support a healthier lifestyle and helping athletes reach their full potential,” said

Drumwight. “This alliance is no exception. We’re thrilled to have the support of Gatorade and the entire Pepsi family as the exclusive sports drink partner. Known for fueling the athletes of today and tomorrow, Gatorade is a welcomed

addition to us and our community. When we kick off this winter, visitors will see signage from Pepsi and Gatorade, and athletes and staff will also have access to their brands during training.”

The 62,000 square feet facility, slated to open this winter near I-269, will feature four indoor NCAA regulation basketball courts, volleyball, climate-controlled and open-air space for baseball and softball, on-site orthopedics, 4,500 square feet of strength and conditioning, and more.

The Gatorade Fieldhouse is seeking additional sponsors to showcase their organization to a local and regional audience. From major presence at the complex to naming rights for a team or court, the options are endless. 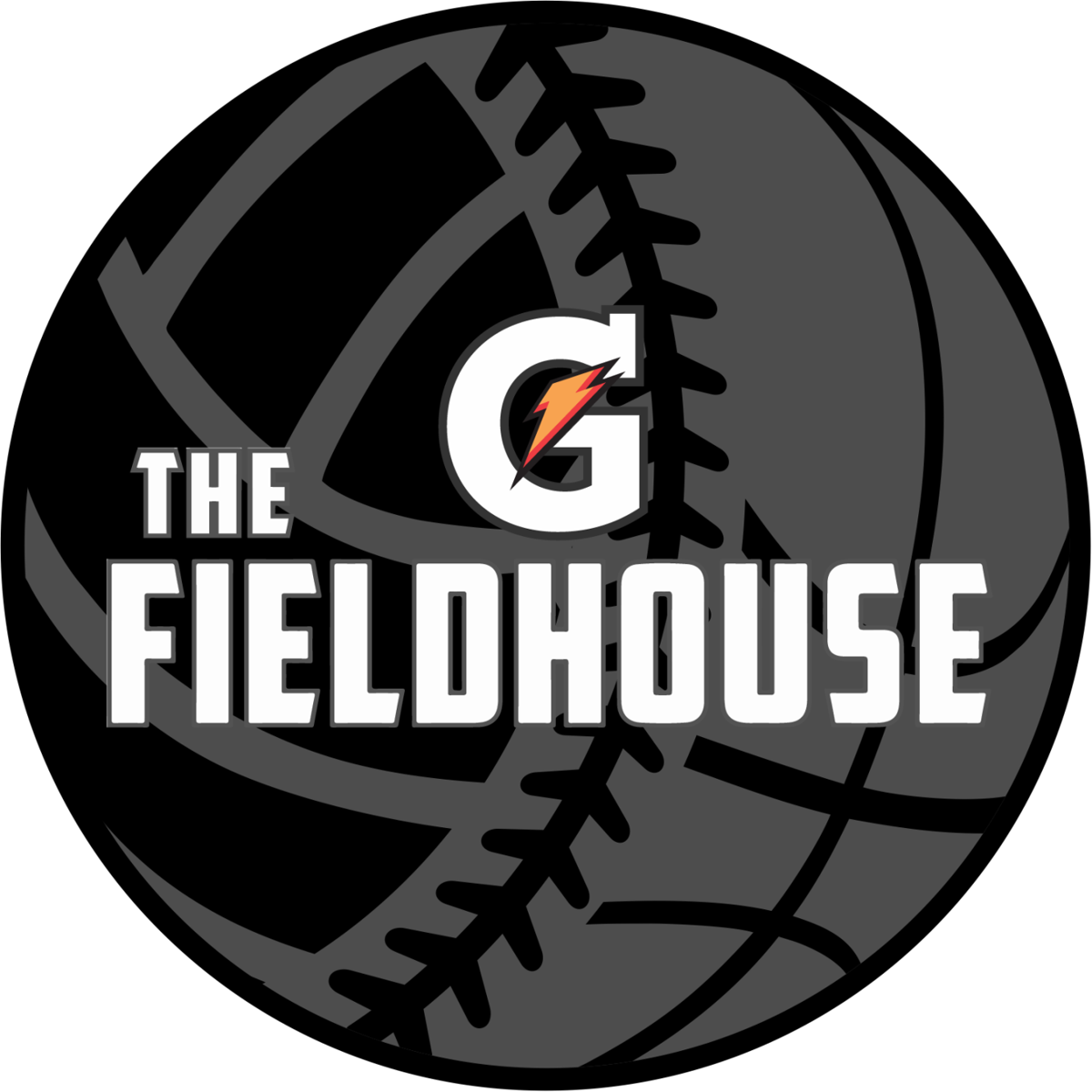 Officials said the property would be the centerpiece of a multi-use recreational complex that includes four fields to be used for tournaments.

Village officials presented the request at the county’s Federal Aid Allocation Citizen’s Advisory Committee meeting last week. Board of Trustees member Ed Finkbeiner said the funding would be primarily used to purchase the property, which he estimates is appraised at $420,000.

The 88-acre, two-mile portion of land along the Tioughnioga River was initially appraised at $382,000 in 2018, when the village considered acquiring the property. The property, which runs along Route 11 and ends close to Yaman Park in Cortland, already has softball fields that are used for other purposes. Installing the four new lacrosse and soccer fields would cost the village $30,000, Finkbeiner said.

A concept of what the complex would look like from the village of Homer’s presentation. (Photo provided by the Village of Homer).

“The village does not expect to use any income generated from this project to help our budget,” he added.

Finkbeiner noted that the possibility to host tournaments at the proposed complex would pay for parts of the project. He added the village is prepared to use money from their reserve accounts, as well as their own allocation from the American Rescue Plan Act to pay for the project.

“This is a great thing for the county,” Finkbeiner added, describing the project as “synergistic.”

Village recreation director Zack Pollak noted that based on a study on a similar proposal to attract Little League families in Michigan, Homer could be attracting 445 people per weekend through soccer tournaments in the summer.

Finkbeiner added that the same study showed that parents tend to spend close to $1,000 in the community for food and other leisure and tourist activities.

Other amenities planned for the complex include creating the county’s first dedicated, 2-acre dog park. Finkbeiner noted there are at least 809 dogs in Homer, highlighting the demand for the dog park. It would be used by residents of other municipalities. The village could also implement 2-mile long walking trails from Durkee Park in Homer to Yaman Park in the city, he said.

Finkbeiner said the village will cover the closing costs on the property, build the proposed fields, as well as the dog park, provide bathroom facilities, install lighting, build pavilions and pay for yearly maintenance and operational costs.

He also added the village could consider purchasing an adjacent property currently owned by the Cortland County Industrial Development Agency (IDA) to bring in some extra parking space for the complex.

“This is really an asset for the whole county,” Finkbeiner said.

“If half of your asking (price) were to be granted, where does that leave you?” Newell asked.

Village treasurer Tanya Digennaro said the Board of Trustees would have to look at the feasibility of footing the rest of the bill to acquire the property.

“If there is a partial award, the village has some reserve money,” she said. “The Board of Trustees would have to reassess if it is feasible to buy the land.”

The event will be held Thursday from 5-8 p.m. at the Highlands Sports Complex. Vendors from all over the Ohio Valley will be handing out treats and the complex, in conjunction with the United Way of the Upper Ohio Valley, also will host a costume contest.

Prizes will be awarded for the scariest, cutest, funnies and most creative costume at the complex, as well as an overall winner, who will win a free birthday party, a $300 value.

Tickets for the event are $5 in advance and $7 the day of the event. That ticket includes a hot dog, small soda, $5 arcade card and trick or treating inside the complex.

The varsity Wheeling Central volleyball team has volunteered to run the cash games that will include a witches hat ring toss, mummy sack races, ghost/pumpkin bowling, and pin the spider on the web. Norma Fleagane, local published author of the series “Sneaky the Hairy Mountain Monster,” will have book readings throughout the evening and will be donating 10% of each book sold to United Way of the Upper Ohio Valley.

All proceeds from the event will go to the United Way of the Upper Ohio Valley. For more information, call the complex at 304-238-9650. 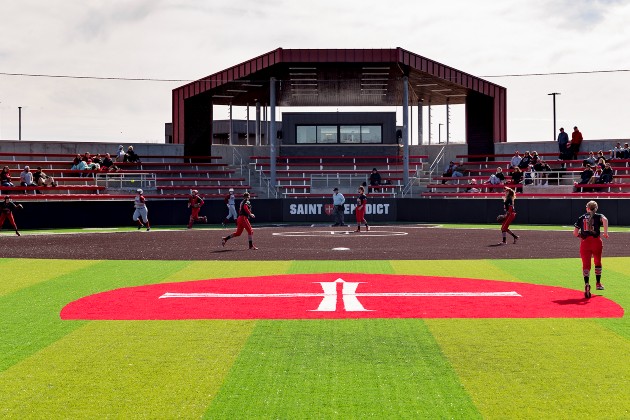 Submitted by the College of Saint Benedict

College Sports – A college softball complex has been named the best in the nation among Divison III schools.

The College of Saint Benedict Softball Complex was named the 2021 Netting Professionals/NFCA Field of the Year. The award recognizes top fields and stadiums in the nation for their flawless grounds maintenance and top-notch playing surfaces.

“I am thrilled to have our softball complex recognized by the NFCA,” CSB softball coach Rachael Click said. “Many hours went into the planning and construction of the fields, and they continue to be maintained at the highest level by our dedicated grounds crew.

CSB’s softball complex includes both turf and natural fields and turf bullpens and batting cages. It also features a heated press box, sound system, lighted grandstand and dugouts, custom player lockers, bat racks, and branded backstops. There are bathrooms for the teams located in both dugouts, a ticket office, restrooms and concessions for fans. 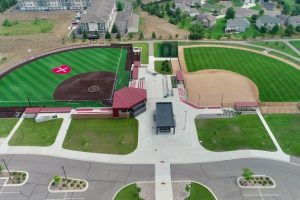 Submitted by the College of St. Benedict

Founded in 1850, this small, well-regarded liberal arts college made a major investment in their facilities with the renovation of Tucci Stadium, home to their football, lacrosse and track teams. Among the larger aspects of the renovation project was the installation of new field turf as well as a new barrier netting system that would provide protection to the area around the field.Their primary goal was to contain stray lacrosse balls from every shot angle, so a 15-foot high inline lift & tension barrier system with 1-3/16″ square lacrosse mesh netting would give them the protection they needed, but also afford them the flexibility to easily take down and remove. The ability to easily adjust tension from the ground would also ensure very little sag between poles, while maintaining clean lines and the professional aesthetic they valued. 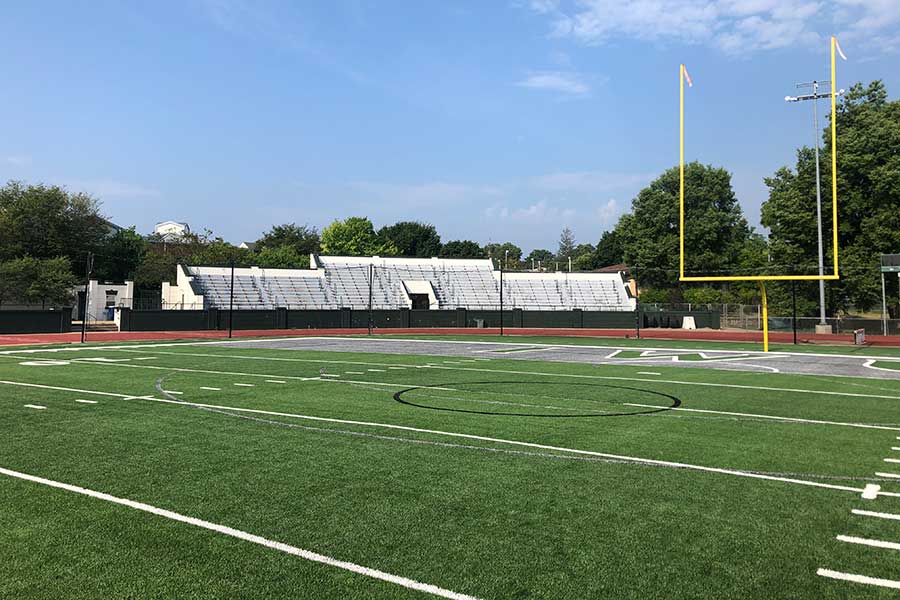 Working with Beacon was so easy. We opted for onsite assistance from a Beacon rep during installation and he was incredibly hardworking. He took the time to make sure we understood all the ins and outs of our new system. From beginning to end, Beacon was great partner.

University officials knew they needed an easy-up, easy-down system so the lift & tension method of raising and lowering would give them a trouble-free process for taking the nets down to enable off-season storage. However, another request involving take down needed to be addressed. They not only needed to be able to easily remove the netting panels, for player safety they also needed to have the option to completely remove the poles as well. The space is fairly tight between the corners and sides of the end zone and the surrounding track, so university officials wanted to be sure football players would not have any accidental collisions with the poles.

At Beacon, we routinely stress player safety as well, so we agreed this was an area that absolutely needed to be addressed. A customized solution included a hardware package that allowed the sides of the U-shaped design to raise and lower independently from areas behind the end zone. Employing aluminum poles set in ground sleeves would mean only two people would be needed to lift and remove the lightweight poles entirely, ensuring players would not be at risk when running through the end zone. 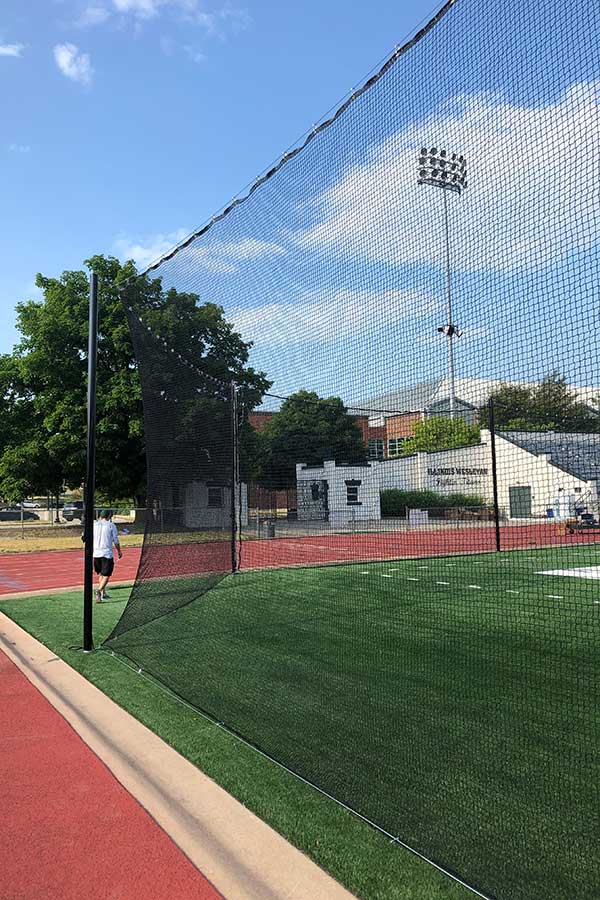 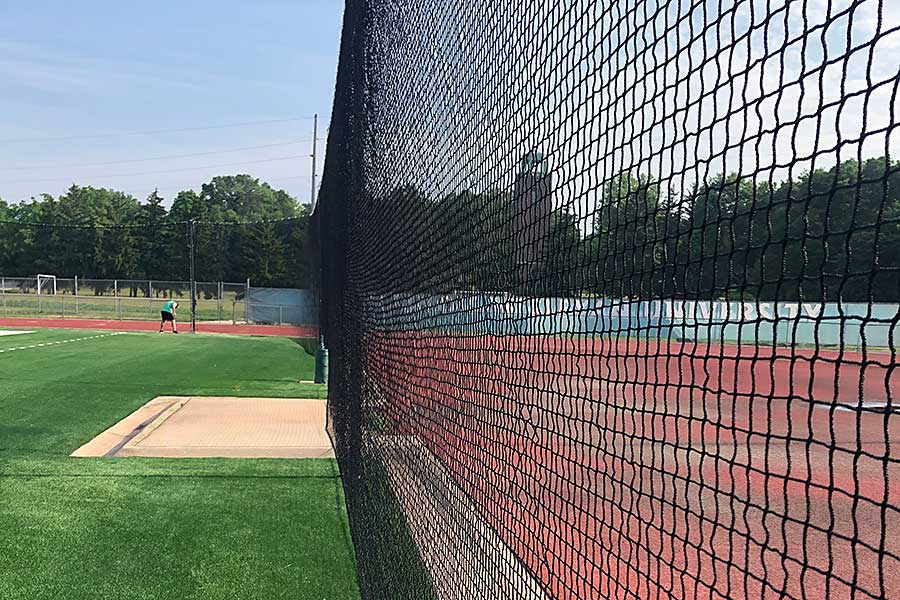 Helping and guiding our customers throughout the entire process is something we take great pride in. An investment like this is something we do not take lightly, and the size of the project alone can cause a lot of anxiety for our customers. From the designing phase to coordinating installation, we make sure the customer is empowered with everything they need to know throughout every step, including the option for onsite assistance.

Our focus on client education and making sure they understand every aspect of their netting system and best practices for using and maintaining it left a very positive impression on the athletic department at Illinois Wesleyan. Associate Athletic Director Tony Bankston explains: “Beacon walked us through every important detail that we needed consider and was very responsive whenever we had any questions. Our facility managers, coaches and student-athletes are all very excited about the results from the Beacon netting system.”

The group is buying the building, which houses the two ice rinks, four basketball/volleyball courts and a fitness center. It is located at 8159 Oliver Rd.

The goal of the new owners is to increase the number of kids playing hockey and basketball in the area.

“What’s exciting is that now our youth don’t have to leave the community to perform or compete in their sports,” said Tyler Travis, one of the four partners and director of ESN Fitness and Performance Center. “They can train here. They can compete here. We host all the big events that can be right here in Erie. It’s right off I-90; it’s very convenient. We’re going to bring more people into our community also that will also invest in what we have to offer.”

“We’re super excited,” said Tim Pagano, one of the four partners. “We saw this place as a great opportunity to give back to the community and bring people in from out-of-town, as well to have large tournaments here and stuff like that. Going back to the Junior Tournament we had here a couple of months ago, it’s just a great opportunity to to bring people to the area.”

The name – Erie Bank Sports Park – is staying the same. The existing facilities inside the building will also remain.

Work is now underway to remove the driving range in the dome and install a synthetic turf, which will be used for two baseball/softball fields or three indoor soccer fields.

The new, indoor fields are expected to be ready in about three weeks.

They also plan to start work on bringing the fun park, which includes go-carts, batting cages and mini-golf, back to life. It is expected to be ready in spring 2022.

The mini-bumper boats are being removed. Instead, a beach area will be installed for beach sports like volleyball.