This is a great opportunity to evaluate your surface grade.

It’s fall and daylight is on the wane. The sun is coming up later and setting earlier. We are beginning to see a cool night make an appearance on occasion. And most baseball and softball seasons have wrapped up for the year. There will be some fall ball seasons played but football season has taken the lead. That means many ball fields are done for the season so it’s time to get to it and get those fields ready for next spring.

In “Renovation Part 1” we talked about getting the grass back into shape after the season as well as dealing with any lip issues that may have developed during the season. Now, we move to the infield skin itself. This time of year is the best time to do any renovation on the infield skin whether it is minor or major. You have plenty of time to work on it without the pressure of an opening day deadline and still plenty of favorable weather and soil moisture conditions.

A season can take a toll on an infield resulting in ragged turf edges and high and low spots in the infield skin. Reestablish your turf edges by running string lines and scribing arcs to mark out where you need the turf edges trimmed back in order to give the field some crisp, clean edges. If you find that trimming your baselines or infield edges are making those skinned areas too large, you may have to consider placing a strip of new sod in along the edges in order to reduce the width of the baselines or the size of the infield. This is usually inevitable over time where cool season grasses are grown. Southern grasses will grow much more aggressively into the skin areas and therefore trimming edges is a more frequent task where they are grown. 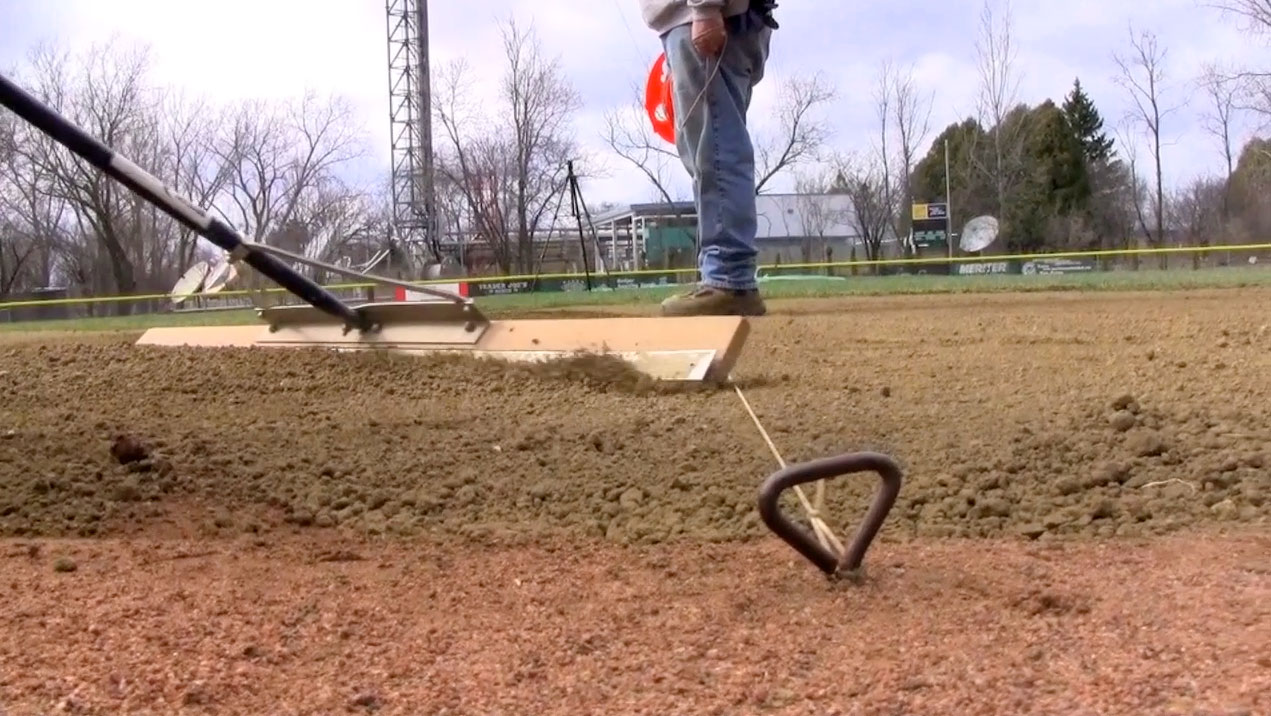 With the lips removed from your field and crisp clean edges reestablished, you can now use a string line to evaluate the condition of the surface grade of your infield skin. By stretching a string line from the front turf edge to the back turf edge of an infield, we can instantly see the condition of the surface grade of the infield skin. High spots will push the string up while low areas will leave a gap between the string line and the infield soil surface. When checking the grade, make sure that the string line is pulled as tightly as possible otherwise the line may sag providing incorrect readings of the surface grade. Take a survey of the infield by running string lines in several locations around the skin to check for the amount and magnitude of high and low areas on the skin. In general, high areas will typically occur on the first and third base corners of a baseball infield skin as well as along the back edge along the back arc. Low areas will commonly occur in leadoff areas around bases, fielder’s positions and the front edges of the infield skin.

It is important to rectify these issues as soon as possible as these imperfections in the surface grade of your skin areas can create major headaches in rainy weather when you are trying to drain the field. IF you are lucky, you have the budget to call in a sports field contractor to repair the surface grade and improve its performance. If not, this work can be done on a low budget basis by doing it the old fashioned way, by running string lines and using your nail drag, rakes and level boards to manipulate the surface by cutting the highs and filling the lows to achieve a smooth and consistent surface grade.

If you have historically had problems with the performance of your infield soil, an Infield Soil Test can be performed to look at the physical makeup of your soil. A test will expose any weaknesses in the make-up of your infield soil — Beacon can provide this service to you, contact us for more info. With the innovation of DuraEdge™ and FieldSaver™“engineered infield soils” in the past decade, it has become easier and financially effective to fix most problem infield soils without pulling out the old soil in most cases. The late summer and fall season is a great time to make adjustments to your infield soil using these materials. A balanced infield soil and the perfect grade will provide you the ultimate playing surface.

Finally, I’d like to mention a common question we get here at Beacon. Customers will often call to ask me how to keep weeds out of their infields and warning tracks. You can spray Roundup (Glyphosate) or other non-selective herbicides onto these areas but more than likely the weeds will return. The best way to prevent weeds on an infield skin or warning track is to continue maintaining the surface by dragging it about twice a week. This should be done throughout the remainder of the growing season. It will also keep the field smooth for surface drainage. There really is no other magic way of suppressing those persistent weeds.

SYRACUSE, N.Y. – Step into the Carrier Dome for Syracuse football’s home opener against Clemson on Sept. 14 and you’ll notice something quite different.

The concession stands at the dome have a whole new look this year—each stand has its own name, menu and identity, with the goal of fans connecting particular foods and drinks to individual stands, said Mark Tewksbury, director of food services at Syracuse University.

Many of the stands have now been equipped with TV monitors on the front of the stands that display both the menu and the broadcast of the game, so fans getting a snack won’t miss any of the action.

Here’s a look at both at the stands and the new foods they’ll be serving this season.

The popular nickname for hot dogs at the dome is now official and to celebrate, the school is adding a new dome dog. You can still get the classic Hofmann frank ($4.25), but fans now have the option of a larger, quarter-pound beef frank. Also made by Hofmann, the new hot dog has a firmer texture and bit more spice than the classic Hofmann German frank, which is made from beef, pork and veal. Think something closer to a Nathan’s or Hebrew National dog.

Borrowing its name from the Carrier Dome’s nickname, these new stands will offer burgers, sausages, nachos and other foods, as well as draft beer, canned beer, wine and canned cocktails. The location outside Gate E will be the only concession stand in the dome to offer chicken tenders. The braided pretzel at this location ($4.75) costs 50 cents more than the other soft pretzels found in the dome, but it’s larger than the others. Burger and chicken tender baskets come with fries at the Gate E location and with kettle chips at the Gate B location.

Locations: Outside Gate E and Gate B.

Gone is the Sbarro pizza and in its place is The Tomato Wheel, which launched in the university’s Goldstein, Kimmel and Schine food courts in fall 2018. Among the new arrivals are a pair of specialty slices topped with ricotta cheese ($5.25) or pepperoni and sausage ($5.75) and a stuffed pizza pretzel ($5.50). The stands will also serve regular jumbo pretzels, hot dogs, Italian sausage sandwiches, candy, beverages and healthier options, such as fresh fruit or cheese and grapes.

This is a totally new construction located near Gate E. The menu is succinct: Popcorn—available simply with butter or in flavors that’ll change throughout the season—cotton candy, caramel corn, churros, candy and beverages.

Location: Between Gates D and E.

This grab-and-go station was added in an effort to boost the healthier options available at the dome. A variety of wraps and salads are available, as well as hummus cups, yogurt parfaits, fresh fruit and cheese and bottled iced teas and juices. For those looking to indulge, the stand will also sell chips, candy and sodas.

Location: Between Gates A and B.

This stand at Gate A replaces a craft beer stand. Among the new signature items are walking tacos built with your choice of Doritos or Tostitos tortilla chips and nachos served inside a souvenir football bowl.

The three Perry’s Ice Cream stands around the concourse will now serve warm chocolate chip cookies. Sourced from David’s, these cookies would be an ideal pairing with ice cream. Just don’t forget the napkins. 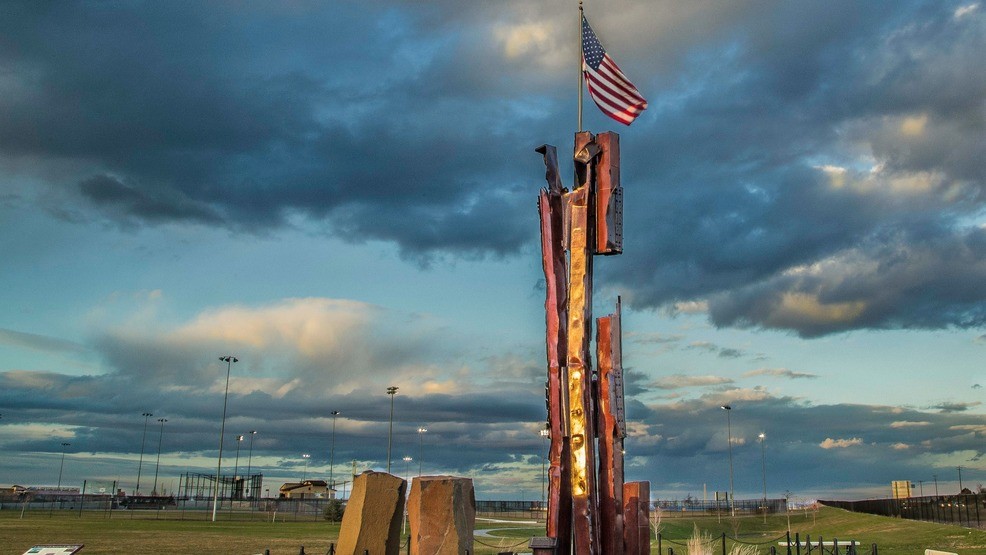 KENNEWICK, Wash. – There will be a memorial for 9/11 at Southridge Sports and Events Complex in Kennewick.

The City sent out a press release with the timeline of events for Wednesday.

The release stated the following:

With the upcoming anniversary of September 11, 2001, we want to remind our community of the 9-11-01 memorial located at the Southridge Sports & Events Complex in Kennewick – 2901 Southridge Blvd.

The memorial will be open and accessible all day on Wednesday, September 11th and we encourage everyone to visit at their convenience to remember the tragic events of September 11th.

We appreciate the opportunity to join our community in paying respects those who sacrificed their lives and continue to do so for our safety, security, and freedom.

We will never forget!

The Tri-Cities Professional Firefighters Honor guard and the Kennewick Police Honor Guard will have a combined honor guard. Following is the timeline for the honor guard and moments of remembrance that will be observed at the 9-11-01 memorial location:

0630 Presentation of the Colors – National Anthem – Posting of guard

1010 In memory of Flight 93 crash in Pennsylvania – Guard Change

This is the 17th annual anniversary of the memorial run.

9-11-01 Memorial Background – The City of Kennewick was one of only a few communities throughout the entire United States that received a piece of steel from the World Trade Center and we are extremely proud to have this memorial in Kennewick. Lampson International worked in conjunction with the City of Kennewick and the Port Authorities of New York and New Jersey to facilitate the monument’s transfer and fabrication.

The memorial quickly grew in to a community-wide volunteer project that had numerous local businesses and residents working in partnership and donating generously.