In Hendersonville, a new system is letting folks know when they need to get off the field as a storm approaches.

The spring sports season is off and running, and now is the time of year when folks need to stay ‘weather aware’ when they’re out at a child’s event.

In Hendersonville, a new system is letting folks know when they need to get off the field as a storm approaches.

You might notice them. They’re called lightning detectors and they’re placed all around the fields at Drake’s Creek Park. They go off when the conditions are right for lightning in the area.

The system is about getting everyone on the same page.

Andy Gilley, Parks Director for Hendersonville said, “It runs on a radio signal, we have relays throughout the park – when the atmosphere conditions are such that lightning could be present within two miles – a horn will go off that will clear everybody off the fields. When those conditions are no longer there – three horns will go off to let everyone know it’s safe to return to play.”

La Vergne has one of these detection systems also. They’re also found at fields in Memphis, in Kentucky, and on several golf courses.

Hendersonville said they plan on having all of their major parks equipped with these detectors in the coming weeks.

Buffalo, NY – The biggest news at the ballpark in 2019 is the name. And, of course, what that means for the food.

Sahlen Field, named for the Buffalo hot dog company, is the fifth corporate name of Buffalo’s downtown stadium. Just like the previous name, Coca-Cola Field, this naming rights deal has a 10-year commitment that was announced in October.

At the concession stands, the new ballpark name should tell you what’s going to be a point of emphasis.

He’s not kidding. The team is returning footlong hot dogs to its concession menu, creating a Sahlen’s Specialty Station featuring an all-beef dog and a rotating specialty dog with toppings, and adding an Italian Hot Ham sandwich.

“We’re always looking at what we can do to raise the bar for fan amenities, whether that’s through promotions, new food items we have or even events in the ballpark that happen when the Bisons are on the road,” Buczkowski said.

Here’s a look around the park and the International League for 2019:

Going green: The Bisons have added 2,000 more wide green seats on the ballpark’s main level, dropping capacity by about 300 to 16,600. Ticket prices are up 50 cents across the board, but the team also raised the discount from $2 to $2.50 per seat for tickets purchased prior to game day.

So tickets run from $13.50-$16.50 on game day, but can be had for $11-$14 prior to game day, and are available at those prices without fees if purchased at the ballpark’s Swan Street ticket office. Multiple ticket discounts are available through partners AAA, the NFTA and Wendy’s. More are listed at Bisons.com.

In the restaurant: There will be no more a la carte menu at Consumers Beverages Pub in the Park, the ballpark restaurant long known as Pettibones Grille. Instead, the team is moving to a full buffet offering starting two hours before the game.

“We had a lot of days where you had a mini buffet and the menu had limited choices and most everybody seemed to go for the buffet so we thought, ‘Let’s expand it.’ ” Buczkowski said. “Now it’s going to be much bigger.”

The Bisons plan to match the restaurant buffet with promotions like ethnic festival nights, food choices based on the opponent and items their cities are known for, and will be getting player input on some family special dishes that they can recreate for fans. 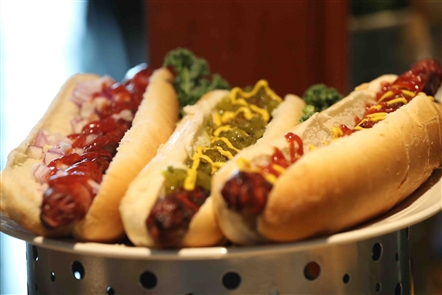 Top promotions: The team will give out beef on weck bobbleheads on July 16 and Vladimir Guerrero Jr. bobbleheads on July 21. “Star Wars” Night is June 8, the 25th annual Independence Eve with the BPO is July 3 and the team will debut a “Game of Thrones” Night on June 22. There will now be a monthly Dog Day, with fans invited to bring their pets to the right field berm. There will be a dog chew toy giveaway as part of that on May 16.

A new look in Syracuse: The Chiefs are no more and the club, which is owned by the New York Mets, will now be called the “Syracuse Mets.” The big news there is who is in the outfield. No, not Rajai Davis, whose dramatic home run tied Game 7 of the 2016 World Series for Cleveland against the Chicago Cubs. We’re talking former Heisman Trophy winner Tim Tebow, now a 31-year-old outfield prospect coming off a year when he batted .273 at Double-A Binghamton. The Mets’ move from Las Vegas is the league’s only affiliation change this year.

Who else is coming to town: Former Bisons player and manager Joel Skinner is in his second year as the skipper in Rochester. Former Buffalo shortstop Jay Bell is in his first year as manager at Scranton/Wilkes-Barre and will be closely watching the progress of top Yankees prospect Clint Frazier, who missed most of last year with a concussion.

The playoff format: It’s status quo, with all series a best-of-five. The North Division winner plays the wild-card team in the semifinals while the West and South Division winners also meet. The two survivors play for the Governors Cup. The league champion meets the Pacific Coast League survivor in the Triple-A National Championship Game Sept. 17 in Memphis. The Bisons have the longest playoff drought in the league, dating to 2005 when they were still a Cleveland affiliate.

Home is not where the titles are: The clinching game of the last 11 Governors Cup finals has been won by the visiting team. The last team to celebrate a title on its home field was the 2007 Richmond Braves. Durham has won the last two crowns, winning the series last year when it was played entirely at Scranton/Wilkes-Barre due to hurricane warnings in North Carolina. The Bulls will be going for the IL’s first three-peat since Columbus did it from 1979-81.

Get a move on: The minors are pushing pace-of-play initiatives and will make test runs for some of Commissioner Rob Manfred’s potential rule changes at the big-league level. Specifically, all pitchers at Triple-A and Double-A must now face a minimum of three batters (or record the final out of an inning) before they can be replaced. Mound visits (recorded on the scoreboard by the linescore as “MV”) have been cut to five per game from six, with one additional per extra inning. The extra-inning rule used last year remains in play: Each extra inning starts with a runner on second base.