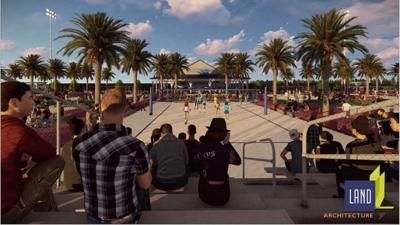 This rendering shows what the sand volleyball courts at the Youngsville Sports Complex could look like. The project is expected to be completed in the fall of 2019.

The Youngsville Sports Complex could soon attract even more people for recreation and tournaments thanks to the addition of sand volleyball courts.

Five NCAA-spec sand volleyball courts will be constructed over the summer in an existing green space adjacent to the tennis courts at the complex, according to Youngsville Mayor Ken Ritter. A pavilion with restrooms and concessions is also included in the construction plan.

“The addition of sand volleyball will add another layer of recreation for our residents, and it’ll serve as a catalyst for economic growth in our community,” Ritter said. “It’s good for our local businesses and good for our economy.”

The Youngsville Sports Complex regularly hosts soccer, softball, baseball and basketball tournaments. This fall, it will be the site of the largest amateur boxing tournament in the country.

Construction of the volleyball courts is scheduled to begin in May and is expected to take about five months.

The $824,900 project is being paid for through Youngsville’s 1-cent sales tax dedicated for recreational purposes.

R.S. Bernard and Associates of Lafayette was the low bidder on the project. Land Architecture, also of Lafayette, has drawn the plans.

Township Administrator Bob Bass and Trustee Tom Willsey are two of 30 local government and business people making the eight-hour trek to Manheim, Pennsylvania on Monday to experience the impact the huge development could have here.

“The Chamber of Commerce has done a good job of selling the fact that this could have tremendous regional impact on the economy, based on the fact that the one in Pennsylvania does,” Bass said. “As a result of that we want to go see what it is and how it may or may not effect Ross Twp. in the future.”

According to an economic analysis performed by Tourism Economics, an Oxford Economics Company, Spooky Nook’s Pennsylvania complex had $15.5 million in revenues last year, with another $5 million at the Warehouse Hotel within the sports complex. The company last year had about 150 full-time employees and as many as 450 part-time seasonal workers. More than 1.1 million people (470,000 from outside the immediate area) visited the Pennsylvania site in 2017.

Sponsored by the Greater Hamilton Chamber, the trip travelers include officials from Ross, Hamilton, Miami University Hamilton and a host of local businesses.

Dan Bates, chamber CEO and president, said this will be his fourth trip to the original Spooky Nook. He said they invited Ross along on this trip because “they have some big economic development plans in their future that they’re working on” and they want to help further those goals.

“We’ve really been working with our business community and trying to get the businesses to understand the potential impact of Spooky Nook when it comes,” Bates said. “We’re looking at all the arterial roads that will be coming to Spooky Nook and certainly that impacts Ross.”

Bass said the township is looking at both the positives and negatives such a huge development might bring and trying to prepare as much as possible.

Living next door to a major city had a downside a couple of years ago after a drive-by shooting happened there and the suspects tried to escape through the township. Ross Twp. police Capt. Jack Tremain and officer Larry Johns chased — climbing steep hills and crashing through vegetation — the suspects and eventually helped apprehend them.

Bass said officials are examining all aspects of the giant new neighbor.

“I can surmise we are going to get more traffic volume through town,” Bass said. “Whether that parlays into more businesses or not I don’t know. That’s part of what we want to go go out and see, how it actually has effected that area… We’re looking at it from the total impact side of it.”

No Butler County officials were on the guest list for Pennsylvania trip, despite the fact the commissioners have pledged $2.5 million towards road infrastructure for the project. Commissioner Don Dixon said they have been asked on junkets to the Spooky Nook site before, but they already know what they need to about the project.

“Nothing is all positive, there’s always some negative effect,” Dixon said. “But by far when you get an activity like that or a user like that the benefits outweigh the negatives… You can plan what you want to plan but in reality, until you open the door and turn the lights on, you can build it and see if they’ll come, that’s the deal.”

LORETTO, Tenn. (WKRN) – The Loretto Sports Complex was considered one of the nicest sporting facilities in the state, but after a tornado touched down in November 2018, it was destroyed.

“We lost our wall, our backstop, we lost the bleachers, the dugout,” Said Loretto Baseball Coach, Gary Lamm.

There wasn’t much that didn’t have damage or need some kind of repairs.

“It was heart breaking,” said Lamm, who was unsure his baseball team would be able to play on the field this season.

The tornado struck quick and only lasted a few moments, but the destruction would cause more than $400,000 in damage and take months to clean up.

“We spent a lot of time on the computer, on the phone, sitting and talking and trying to figure out how we were going to put this all together,” said Loretto Parks and Recreation Director, Mitch Webb.

A devoted coach, city administrators and the community have all played a part in getting things cleaned up. The complex is still closed and construction is underway, but the hope is to have Gary Lamm field open for at least a few games this season.

“I know our seniors would love to be able to play their senior season on this field here and that is what they keep asking,” said Lamm “I say we are doing our best we can and that is all we can do.”

The city hopes to add a few additional features to the sports complex once the original structures have been repaired or rebuilt.

The team said it wants to make going to the game

Hot dogs and other items will be offered at discount prices at Twins games this season at two stands.

The Minnesota Twins are sharply cutting prices on some traditional concession items at two locations in Target Field, the team announced Wednesday.

The team said it is discounting prices on hot dogs, nachos, soft pretzels, peanuts, popcorn, soft drinks and specific beers in hopes of making the expense of coming to a game more affordable for families.

“The Twins are excited about partnering with Delaware North Sportservice to bring family-friendly concessions pricing to Target Field,” team president and CEO Dave St. Peter said in a statement announcing the reductions. “The affordability of the Target Field experience remains paramount to our efforts to attract kids and families to the ballpark.”

The lower-priced items will be at the stadium’s two “State Fair” stands: Section 133, in right-field lower level, and Section 327, in the left-field corner of the upper level.

Some of the discounted items do not have an exact apples to apples — or peanut to peanut — comparison for the same food and drink sold elsewhere in the stadium, and regular prices on some of these items have been nudged up a bit from 2018.

Here are the reduced price offerings, with this year’s prices elsewhere in the stadium for comparable items in parentheses:

The concessions stands will also offer a more convenient self-checkout process, with fans being able to make their purchases using touch-screen kiosks.